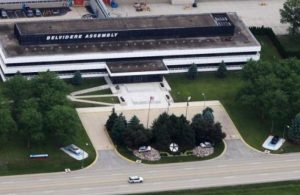 A telephone line can hardly contain Belvidere Mayor Mike Chamberlain’s excitement. And after the recent announcement that Fiat Chrysler Automobiles would add 300 jobs at its Belvidere-based car production facility, who could blame him?

“This was a huge announcement for us,” he said. “The way we count it here is how it affects the regional economy, but it’s great news for the state of Illinois, too.”

The car company, which has had a plant in town since the 1960s, plans to pump $350 million into the plant as it prepares to shift production of its Jeep Cherokee from Ohio to Illinois.

The announcement came as the other models now being produced at the plant, the Dodge Dart and the Jeep Compass and Patriot models, are being phased out, producing economic anxiety in the region.

Chamberlain said the additional employees will bump up the total employment at the plant to more than 4,000, a figure that includes workers from nearby Rockford and those who commute from the neighboring states of Iowa and Wisconsin. It also will lead to the addition of accompanying supplier businesses, two of which are already building new facilities in Belvidere, he said.

“The total impact is certainly going to be beyond the $350 million,” he said.

Jimsi Kuborn, vice president of investor relations for the Rockford Area Economic Development Council, told the Rockford Register Star that a government study found that for every 100 jobs created at the Belvidere plant, 46 additional second- and third-tier jobs are created. He added that for every $1 million in output at the plant, $322,000 by other industries in the region results.

With the new vehicle line, Mayor Chamberlain said, the city’s industrial park is being stretched thin and officials are looking for areas in which to expand.

“The plant has waxed and waned over the years, but it’s been a fixture here for a long time,” Chamberlain said. “Right now, we’re running out of buildings.”