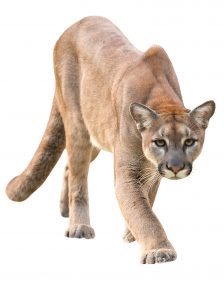 Cougars spottings occur a few times a year in areas throughout Illinois, but wildlife experts reassure residents they are not a real threat in the Northern Illinois suburban regions.

The recent sighting of a cougar in Winnebago County is the latest in a string of sporadic accounts of large predators like cougars, wolves, and bears wandering through Illinois.

But local wildlife experts believe that this doesn’t indicate that these animals are intending to put down permanent roots in Illinois.

Like the bear that wandered down from Wisconsin a couple of years ago and made himself somewhat of a media sensation, these animals are struggling to find an environment where they can exist due to their presence and populations in other parts of the country, according to Peggy Doty with the Educator, Environmental, and Energy Stewardship with the University of Illinois Extension.

“It is a matter of us recognizing that this is nature and no one is walking these animals through an imaginary gate,” Doty said.

Stephanie Touzalin, a Naturalist with the Forest Preserve District of DuPage County, said the animals spotted in Illinois are likely  young males who had been sent on their way by their mothers.

“These animals were dispersing their young,” Doty said.

Cougars “home territory” can extend 70 miles while at one time, bears traveled from Alaska to Florida.  However, today there isn’t enough contiguous forest to allow them to do that.

After these animals come and visit Illinois, Doty said, they realize that it may not be the best place for them to stay and make a home.

Only 14% of Illinois land could even host and sustain large wildlife, she said.

Of all three large predators occasionally spotted in Illinois, it is likely only a small pack of wolves would have success setting up a pack in northwest Illinois.

Gray wolves have been encountered by residents occasionally in Illinois, including a wolf that was struck by a car in 2005 in McHenry County near Chain of Lakes State Park.

Once nearly extinct, protection provided through the Endangered Species Act and recovery programs have allowed gray wolves to rebound  and expand into Michigan and Wisconsin—but not, so far, in Illinois.

In 2015, a new law offered protection to the gray wolf, American black bear and mountain lion (cougar) from hunting.

Most of the land in Illinois that would be suitable for a large predator is in the northwest corner of the state near the Mississippi River and south to St. Louis, Doty said.

This week Doty will be at the Pecatonica Public Library —near the latest sighting —to talk about the state of these animals in Illinois and behind.

Her presentation is one she’s given to hundreds of other Illinois residents that first began in 2013 following the sighting of a cougar on a farm in Morrison, Ill.

“A woman was home alone with her children and the cougar had to be destroyed,” she said.

In the cases of the cougars that have been destroyed in Illinois, their DNA traces them back to the Black Hills of South Dakota.

Doty, who has a background in wildlife management,  said other parts of the country are used to coexisting with these animals.

Since the early to mid-1800s, mountain lions, wolves, elk and black bears in Illinois vanished due found due to habitat alteration and hunting pressure.

Although the chances of an encounter are very remote, Doty stressed if residents know the animals exist near their home, they need to be prepared for an encounter.

People in other parts of the country who coexist with bears and cougars follow certain precautions, including carrying bear spray or pocket knives.

Doty said  if encountering a bear, people should face front, act big, and yell. With wolves, stand tall and talk loudly, she said.

“Cougars are cats and they can sneak up from behind,” she said. If there has been a sighting of a cougar, Doty suggests people don’t jog alone or leave children playing outside alone.

The Illinois Department of Natural Resources states that property owners can reduce encounters with wildlife by securing potential food sources, including pet food, barbecue grills, trash and other sources. Bird feeders can be taken down temporarily in the event of a local sighting.

— Despite recent suburban sightings, wildlife experts say predators not on the prowl —