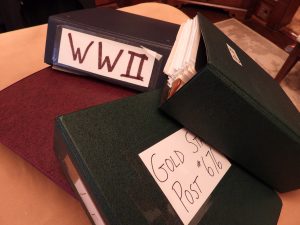 The voices of veterans past and present will live on in a new book complied by members of the American Legion Gold Star Post 676 in Durand.

The 250-page Veterans’ Stories from Small Town America, features the service stories of military personnel from the Civil War to currently members who have a connection to the Durand area.  The book’s publication also commemorates the centennial anniversary of the Gold Star Post which will occur in 2021.

“About two and a half years ago, former Gold Star Post commander, George Faggerstrom, had the idea of collecting veterans’ information and he wanted to get that done before more vets passed away,”  said George Letcher, adjutant of the Gold Star Post. “He had the idea for the book and it took off from there.  There was a group of us who took the idea and just kind of ran with it.

“We sent out a questionnaire form to the veterans we knew to start collecting information.  We put 900 questionnaires in the Volunteer (local Durand newspaper) on two occasions, relied on word of mouth advertising and hung posters around town,” Letcher said. “Pretty soon the responses started rolling in.

Some veterans provided much information and many stories while others just listed their service records.

All of the veterans’ stories in the book are from military personnel who have a local connection.

“Next year the veterans’ memorial at the south end of our Durand town square will be 100 years old.  It features the names of Durand and Laona Township residents who served in the Civil War, the Spanish-American War and World War I,” said Sherry Meinert, historian of the American Legion Gold Star Post 676 Auxiliary, who worked on the book.

“Many veterans from World War I have no more living family members, so I relied on my scrapbook of military articles from the Volunteer to tell the stories of these long deceased service members,” she said.  “Since the veterans are listed alphabetically (in the book), there are some pages that show a grandfather, father and son all serving in wars from 100 years ago to more recent times.”

“I used a newspaper site — geneologybank.com — where you can put in the veteran’s name and newspaper articles will come up from when they were drafted or reported to Camp Grant … I would put clippings of those articles in the book with that veteran’s information.

“I wish we could have collected more information about Doc Young, who was the founder of the Gold Star Post and its first commander; but all of his family is deceased,” Meinert said.  “He was the first fire chief in Durand, was a dentist here, on the draft board and was a renowned community leader.  He is in the book, but we don’t have details of his armed services story, only what the old newspaper clippings tell us.”

According to Letcher and Meinert, Merle Niedermeir is among the oldest living veterans listed in the book while Quentin VanDeWoestyne and Jacob Deppe are two of the youngest veterans with stories.

Veterans’ Stories from Small Town America not only chronicles stories of local service members, but also includes sections on the history of the Gold Star Post, a memorial to the 15 service members from Durand who died in the line of duty, a section on local military history, a scrapbook, a tributes section and two pages dedicated to local businesses that helped sponsor the book.

“The Gold Star section of the book tells of soldiers who died while in service to their country, either on the battlefield or in sickness like the flu epidemic during the World War I,” Meinert said.

Meinert refers to the story of the Wise family as both notable and tragic.

“In 1948, the U.S. government contacted the Wise family asking them if they would like their son’s remains brought back to Durand,” Meinert said.  “The family wanted their son buried in a local cemetery, so when the train arrived with Conrad Carlisle’s remains, the American Legion and many, many local veterans came out to salute the casket and show their respect.

How difficult was it for Mr. and Mrs. Wise to know their son was killed in 1944 and then have to grieve his death all over again four years later when he was brought home to rest?  There were five Wise brothers in the service and their mother wrote five letters every day,” Meinert said.

“After Conrad Carlisle was killed, Mrs. Wise continued to write five letters each day, sending the letter meant for Conrad to one of her friends so that she would still have five letters to send.”

Letcher credits current Gold Star Post commander Duane Stephen for promoting and prioritizing the book project and volunteers Meinert, Bev Letcher and Marilynn Satness for compiling the veterans’ stories, organizing them and typing them into a computer.  Graphic artist, Connie Carlson was hired to format the project for printing

The book was sent for first draft publication and was then edited by the volunteers in September, with the final copy sent for publication in mid-October.

“We truly had no idea what it would take to publish Veterans’ Stories from Small Town America,” Letcher said.

“It’s much more than a compilation of veterans’ stories. The table of contents shows the variety of information and history within the book,” Meinert commented.  “During the Polar Vortex earlier this year, I spent 50 hours working on the book but we all are so proud of the final result.”

A book launch of Veterans’ Stories from Small Town America will be held in conjunction with a community social from 9:00 to Noon on Saturday, Nov. 9 at the Durand United Methodist Church, 102 East Main St

Letcher’s wife Bev puts the whole project into perspective, “The long hours everyone spent creating this piece of local history shows that Veterans’ Stories from Small Town America was truly a labor of love.”