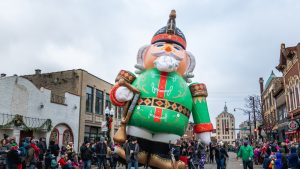 (Photo courtesy of Stroll on State)

“As we approach Stroll on State’s seventh year in the Rockford region, I am awestruck at just how much this event continues to evolve with the help of so many,” said Tana Vettore, RACVB’s director of destination development at an announcement event. “The magic of the season shines through our downtown during Stroll and brings people together in a variety of ways.”

In total, 36 local companies and organizations are providing financial support through sponsorship of this year’s Stroll on State and Dasher Dash 5K. Their investment allows RACVB to present the event as a free gift to the community.

“Each year seems to be even more enjoyable for our team, families and friends,” said Jeff Hultman, president/CEO of Illinois Bank & Trust. “We are grateful for our invaluable partnership with the RACVB which allows us to bring happiness to so many people during the holiday season.”

Additional local organizations and media companies provide support invaluable to the production of Stroll on State.

“Stroll on State is another powerful example of the welcoming nature of Rockford, as we unite for an entertaining and enjoyable kickoff to the holiday season,” said Mayor Tom McNamara. “Most importantly, Stroll illustrates the diverse and progressive spirit of our city, providing a unique opportunity for visitors and residents alike to join together in celebration.”

In 2019, the main event grounds will be along State Street in downtown Rockford bordered by Jefferson, Church, Chestnut and Third streets.

The popular Hot Chocolate Express will be at two locations; featuring a special recipe hot chocolate with sprinkles of marshmallows. Join the Rockford Marlins Swim Team at the Grinch’s MovieLand, sponsored by Xfinity, where you can watch the classic cartoon version of “How the Grinch Stole Christmas,” and at Rudolph’s Reindeer Village, sponsored by Mercyhealth.

Make your way to say hello to Santa at City First Church’s outdoor SantaLand located at the Millennium Fountain on Water Street. A second SantaLand is also available indoors at Stewart Square located at the corner of South Main and West State Streets). The Riverview Ice House will once again be open for free ice skating, with children’s activities, throughout the night thanks to the Rockford Park District.

Live entertainment will take place at various locations, including Veterans Memorial Hall, sponsored by Ironworkers Local Union 498, where Starlight Theater will present “A Christmas Story” at 4:30 p.m. and 7:30 p.m. along with a Once Upon a Dream Performances meet and greet from 3-9 p.m. Just down the street at Nordlof Center, The Studio Rockford will perform “Newsies.” Performances by The Studio are underwritten by the David and Colleen Anderson Family.