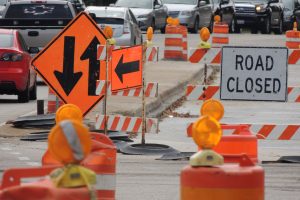 For those enamored with falling leaves, apple orchards and all things pumpkin spice, here’s another reason to love fall; autumn means the end of road construction season in Winnebago County.

One of the biggest and most bothersome road projects on the city’s northeast side has been the partial closure of Spring Creek Road at the Alpine Road intersection.

According to Mark Stockman, director of public works for the City of Rockford, construction at Spring Creek and Alpine has taken longer than most road work due to the amount of repairs needed.

“This was a two part project.  There was a component undertaken by the Rock River Water Reclamation District (RRWRD) to move the sanitary main to a different location which happened to follow the path of Spring Creek Road on the north side of the street,” he said.  “So, there was a joint agreement between the city and the RRWRD that they would replace their sanitary main and restore the pavement, curb and gutter.  The city would then come in after the RRWRD had finished to resurface that entire stretch of road.”

Stockman said that work began in the summer of 2016 with an estimated end date of mid to late November, 2017.

“We’re hoping that the project is totally completed by Thanksgiving,” Stockman said.

Another troublesome route to negotiate is Harrison Avenue between 11th Street and 20th Street on Rockford’s southeast side.  This project, which also started in 2016 is nearing completion.

“We expect to have all the pavement replaced by the time we shut down for winter.  Various items like landscaping will be completed in the spring of 2018,” Stockman said. 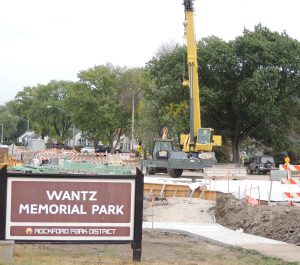 “Projects like Harrison, North Main, South Main and West State are funded 80 percent by state and 20 percent by the City.  So, we get a pretty good bang for our buck when we undertake projects like these,” he said.  “We expect to have the road work on North Main Street completed by the fall of 2018.”

Road construction and improvement is also taking place in the city of Loves Park, just north of Rockford.  Since many Winnebago County residents drive through Loves Park to get to the northwest side of Rockford; it is not uncommon to encounter multiple areas of road work in one trip.

Currently, the most annoying road construction taking place in Loves Park is the replacement of the Wantz Park Bridge on Riverside Boulevard.  As Riverside Boulevard is the main east/west thoroughfare through Loves Park, hundreds of motorists each day are forced to find alternate routes.

Steve Thompson, director of community development for the City of Loves Park, explained the status of the Wantz Bridge project.

“This is a complete bridge reconstruction,” he said. “The structure was aged, so it was completely taken down and a new bridge was put in its place.  The bridge was originally two lanes and now has been expanded to four lanes.  In addition to that, there are new paths and a connection to the sidewalk along the bridge.”

Thompson added that the project started in the late spring of 2017 and is expected to be completed by mid-November 2017.  While the bridge construction is happening and that part of Riverside Boulevard remains closed, traffic is being routed along Clifford Avenue to North Second Street.

Both Stockman and Thompson said that the state’s recent budget impasse  had little to no effect on any of the road projects in Winnebago County.

“We had about a one-day delay due to the state’s budget crisis,” Thompson said.  “The bridge construction was shut down on a Friday and resumed on a Tuesday.  So we didn’t have any major delays.”

“The paving was all completed by the end of September and the lane markings should be done by early October,” Thompson said.  “We expect the road to be fully open any day now.”

Lowell Ingram , a Machesney Park resident, said that road work has definitely affected his daily commute and forced him to use alternative routes.

“The road construction projects this year have been particularly disruptive as some important parallel routes have been obstructed.  As important arterial routes have been closed, there does appear to be increased traffic shunted through residential neighborhoods,” he said.  “Daily travel has definitely been affected and we find ourselves using residential streets to reach these destinations.”

Katie Milos, a 15-year-old Rockford resident, is learning to drive and offers some helpful tips in navigating road construction.

“As a new driver, I think that being very cautious and aware of your surrounding plays a large role in staying safe on the roads, especially during road construction,” she said.  “Also, as my mom has told me, always try to anticipate what could happen in front of, behind, or next to you. Just stay alert and aware!”

Rockford resident, Kevin McCarthy understands that the aggravation of road work yields a better infrastructure in the long run.

“We have to understand that road construction must be done for a number of reasons and it is inconvenient,” he said. “But it’s a necessity that’s needed to keep up with ever increasing traffic.  Saying that, patience must be practiced during ‘road construction season.”

Keeping a positive mindset is crucial for Rockford area drivers as they negotiate road construction, detours and travel delays.

“At the end of the day, we’re just trying to make the roads better for the community,” Stockman said. “People complain about a rough road-way with pot-holes and we’re finally doing something about it.  It’s an inconvenience to dodge the pot-holes and it’s also an inconvenience to have roads closed, so they can be fixed.  There are also many dynamics that go into fixing roads:  dealing with numerous utilities, the weather and governmental entities. We can’t just wrap up these projects in the course of a week or so.  There is a lot more involved; but the end result is definitely worth some temporary aggravation.”