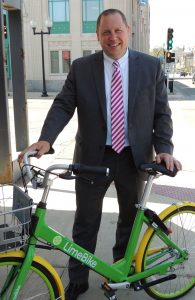 By now, most people in Rockford, Loves Park and Machesney Park have spotted the cheery green and yellow LimeBikes around their neighborhoods.

Since its arrival in early April, LimeBike has received rave reviews from city leaders and business owners alike who see the accessible, inexpensive and ready transportation promoting ecology, health and civic unity.

Rockford’s third ward alderman, Chad Tuneberg, is a solid proponent of the bike sharing program and sees many benefits to having it in our community.

“Bringing LimeBike to Rockford was part of a comprehensive plan initiated by RMAP (Rockford Metropolitan Agency for Planning) and approved by the City Council,” he said.  “There were three similar bicycle sharing companies that we considered…however, LimeBike was the only company that did not require any capital investment from the city.  So, it didn’t cost tax payers one dime to initiate this program in Rockford.  LimeBikes are also dock-less, so they can be left anywhere in the city and need not be returned to a rack at the end of a ride.”

VeoRide, a dock-less bike sharing company, is set up in DeKalb on the NIU campus while Divvy operates in Chicago.  Divvy bikes must be rented and returned from a docking station and are more expensive to ride than LimeBikes.

Within the last month, certain areas of Chicago are piloting LimeBike as an alternative to Divvy.  Springfield is currently looking into the feasibility of a bike sharing program.

Those using LimeBikes in Rockford typically do so for either recreational or occupational reasons.

“There are quite a few LimeBike users who enjoy riding along the river front bike path, but LimeBikes also serve as a means to connect individuals within our city who may not have transportation to school or work.”

While RMTD buses certainly provide an alternative method of transportation in the Rockford area, Tuneberg says that for many people, getting to a bus stop could be more efficient by using a LimeBike.

“I have heard of studies that have found people who take a bus have to walk a mile in order to catch the bus; or they have to walk a mile from where the bus drops them off to get to their ultimate destination,” he said.  “This is why LimeBikes are sometimes parked around bus stops.  If an individual doesn’t have a car; and uses a bus as their main form of transportation, a LimeBike can bridge that gap can and shorten a trip across town on a bus.” 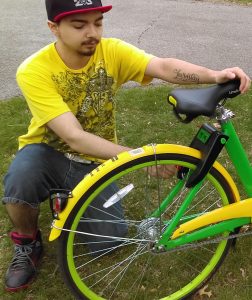 Adrian Richardson of Rockford looks over a Lime Bike in Oxford Park on Rockford’s near northwest side. (Photo by Lynne Conner / for Chronicle Media)

There are a few easy steps to taking a first Limebike ride.

After downloading the LimeBike app on a Smartphone, a map will show where the closest LimeBike is located.  Once a user arrives at the bike’s location and scan the bike’s QR code with a phone, the bike unlocks and can be ridden.

The cost of riding a LimeBike is $1.00 per 30 minutes which is charged to a user’s credit card.  Since LimeBikes are not tied to docking stations, it is possible to find them throughout a neighborhood or community.  The LimeBike website, www.limebike.com, provides additional information, answers user questions and includes contact numbers for phone and text.

The fact that LimeBikes don’t require docking stations is a huge benefit over other bike sharing programs.

“With other bike sharing programs, riders are limited as to the route they chose and where they can leave their bike after the ride is over,” Tuneberg said. “If there is no docking station at a rider’s destination, that person would then have to go out of their way to find a docking station where the bike can be left.  With LimeBikes, riders can leave the bike at their destination, so there is complete flexibility with this program.”

Tuneberg said that if a LimeBike is parked in a particular area for several days, local LimeBike reps may come out and move the bike to a more populated area. The same is true for bikes that may be parked on private property.  Additionally, there are incentives for LimeBike users to ride underutilized bikes.

In viewing the LimeBike app, available bikes are designated on a map by a lime slice.  Some bikes on the map designated by a ring symbol offer users a free ride or ride credit as an incentive to move the bike to a different location.  People can also call LimeBike for information on how to find and use the bikes without Smartphone access.

“For individuals without Smartphones, LimeBike can issue a card that activates the unlocking of the bike before riding.  So, you don’t need to be that technologically savvy or own a Smartphone in order to ride a LimeBike,” Tuneberg said.

Local business owners are also hailing LimeBike as a way to promote the benefits of biking while building public support for the expansion of existing bike paths.

“I think that having LimeBike here is a great development for our town,” said Skip Stienecker, owner of the Rockford Bicycle Company.  “I expect this to be positive for our business.  With more people riding bikes and with more interest in biking, I think this will only help the city, so, I am optimistic about LimeBike.”

Stienecker’s business is appropriately located on North Perryville Road along the Perryville Bike Path, so he gets a certain amount of “ride in” traffic.

Since biking helmets are not included in a LimeBike rental, Stienecker encourages local riders to put safety first whether riding their personal bike or using a LimeBike.

“You certainly should have a helmet on when you are riding a LimeBike or any bike.  An enjoyable ride is one where you don’t have to worry about your personal safety.”

Stienecker also said that he hopes an increase in bike riders will fuel an expansion of current bike paths in the Rockford area.

“We need more dedicated bike trails and we need some east/west trails.  Biking has gotten more and more prevalent in Rockford, but there aren’t that many routes to get around town.  It would be nice to be able to get downtown easily rather than taken an indirect route through neighborhoods,” he said.  “It would be nice if the city of Rockford took bike lanes into consideration when they do road redevelopment.  I would love to see bike lanes on Spring Creek Road and along Riverside Boulevard.”

Zak Rotello, beer director at the Olympic Tavern in Rockford says that LimeBike is a great addition to the Rockford business scene and that he expects an increase in “ride in” traffic as the summer progresses.  The Olympic, located at the corner of North Main Street and Fulton Avenue not only borders a heavily populated residential area, but is also adjacent to a dedicated bike lane along Fulton Avenue.

“There are usually between one to five LimeBikes in front of our building pretty much every day for the last month.  It’s a great option for people who are in the area and want to ride in for a bite to eat and then maybe continue on to another activity downtown,” Rotello said.

“We are a pretty bike friendly business, already.  Seven years ago, we took a spot out of the parking lot and installed a bike parking rack, so in the summer we have quite a few staff and guests biking here.  The bike rack gets so full in the summer that we are considering installing an additional rack,” he said.

“With our proximity to downtown Rockford and the fact that we are located right next to a dense residential neighborhood, we have always been into accommodating bike riders.  I think the fact that you can bike over to the Olympic for dinner or an appetizer with friends gives us a big city feel in Rockford,” he said.

Rotello added that he may consider a promotional this summer at the Olympic for patrons who arrive at the restaurant on a LimeBike.

The many benefits of LimeBike on the Rockford community are just starting to be realized.  Whether biking for fun, running an errand, riding to work or helping to reduce pollution using a LimeBike could be the catalyst that transforms Rockford into a truly biking friendly community.

“Hopefully, LimeBikes will raise more awareness on all the positives of bicycling; get more people involved and the infrastructure to support biking will follow,” Stienecker said.