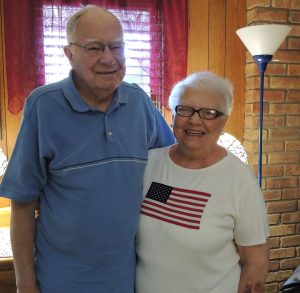 John and Kay Slade in the family room of their home in northeast Rockford. (Photos by Lynne Conner/for Chronicle Media)

If your home is truly your castle, then many Winnebago County senior citizens are spending their retirement years living like kings.

With 37 percent of Winnebago County residents aged 50 plus and approximately 103 senior residential living options in the county it might seem sensible to think about an independent or assisted living facility as an option for housing in retirement.

According to seniorhousing.net, the average cost per month for independent, assisted or nursing care in the Rockford area can range anywhere from $2,450 to $4,350 per month.

Conversely, purchasing a single family home in the area for $118,000 with a 20 percent down payment and a 15 year fixed term mortgage would cost between $400-$600 per month  acording too  (Zillow.com).

The price disparity of senior living communities versus owning a single family home, along with concerns about privacy and independence are just some of the reasons why two Rockford area couples believe there’s no place like your own home.

It’s been 50 years since Jack and Nancy Wilcox bought their home in southeastern Winnebago County.  They are the second owners of their three bedroom ranch house which predates CherryVale Mall, the Clock Tower Resort and the Midway Village Museum campus.

Obviously happy in their home, the couple plans to stay for as long as they can.

“We like the house; it’s been home for 50 years…it’s all brick, it’s maintenance free and we have paid off the mortgage.  We like the big lot and the privacy that it gives us,” Jack said.  “It was a great house for raising kids; we have great neighbors and the house is an ideal size for us now.”

The Wilcoxes, both in their early 70s, are in similar company as at least eight of their 13 neighbors are also seniors.  Amazingly, four of these families have lived in the neighborhood longer than the Wilcoxes. 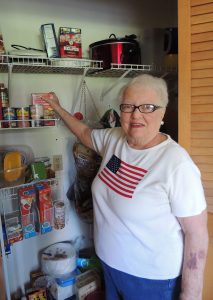 A large closet in Kay Slade’s kitchen can be used as a pantry or to house the washer and dryer.(Photoby LynneConner/forChronicleMedia)

Though the topic of moving has come up in the past, Jack says that he doesn’t see a good reason for change.

“As far as selling the house and going someplace else, I don’t know what I would want that I don’t already have here,” he said.  “I have my workshops downstairs and in the garage.  I like to tinker, I like to work on things, fix things and make things.  For me, to be in a small condo, I wouldn’t have my workshops.  I’d have a chair in front of a television and it would make me crazy.”

Over the years, the Wilcoxes have made improvements to their home including, adding an extra garage, sunroom and deck, renovating the master bathroom and updating the kitchen.

One of their more recent home improvements was to reconfigure their dining room and garage in order to add an upstairs laundry.  Having laundry facilities on the home’s main floor is essential for Nancy, who suffers from multiple sclerosis.

“As we’ve gotten older, we don’t want to go up and down the stairs, especially with heavy laundry baskets,” Nancy said.  “The laundry room is a good size.  It has extra cabinets so I can store some of my Christmas dishes.  This is much safer for me and so much more convenient in general.  It was really a pain to have the laundry in the basement.”

The stairway to the basement now has railings on either side to make a trip downstairs easier for Nancy.

Leading an active lifestyle and helping others in their neighborhood has always been important to Jack and Nancy.  When an older couple down the street had to move suddenly due to illness, Jack mowed the lawn and took care of snow removal until the property was sold.  In order to continue helping his neighbors, Jack has made modifications to his yard equipment.

“When I first started doing snow removal for our neighbors, I had a tractor where I could interchange the mower deck with a snow plow.  As I got older, putting on and taking off a 300 pound snow blade became annoying to say the least,” Jack said.  “So I succeeded in finding a nice used tractor that was identical to what I had.  Now, I have a tractor that is set up for mowing in the summer and one that I use for snow removal in the winter.”

As for the future, the Wilcoxes will most likely move to central Illinois to be closer to their daughter Melissa and her family.  Their son, Mark, who died in an accident in 1994 would have been happy to help his parents in their later years. 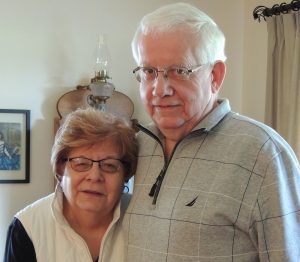 “I do think that Mark would have stayed in Rockford.  He had a lot of compassion and if he had raised a family here, we would have had his assistance,” she said.

For the time being, the Wilcoxes are happy to spend their retirement years in a home that they have truly made their own surrounded by caring friends and neighbors.

“The reason we stay in Rockford, is because our friends are here and to us, they are like family,” Nancy said.

John and Kay Slade, both in their 80s have lived in their northeast Rockford home for more than 30 years.  They too, plan on staying in their home for as long as their health and finances will allow.

“We would like to stay in our home for as long as possible, but it’s becoming very difficult to afford the property taxes.  We can pay our bills and we have good medical coverage, but the worst expense is our taxes,” Kay said.  “Of course, moving into an assisted living facility is also very expensive and even moving into a condo would probably cost us more than living in our home.”

Kay said that she appreciates the peacefulness and safety of her neighborhood most of all.

“It’s a quiet subdivision and most people are around our age.  There are younger families moving in now, but not as many as I thought there would be.  Most of our neighbors have lived here for quite a while and enjoy it.”

“Everyone takes care of their property, in this neighborhood too,” John added.  The Slades have always done their own yard work and for several years, John has planted a garden.  Recently, due to various health issues, the Slades have had to rely on their daughter, Kim and granddaughters, Keelee and Kirstyn to help with outdoor maintenance.

“It’s only been in the last two to three years that we have had Kim and our granddaughters come over to help with the yard,” Kay said.  “Family really has to help if an older couple are going to live in their own home.  I’ve never had to worry about that because my daughter is just wonderful.  She and her girls have helped us out many, many times.”

The Slades son, Jim lives in Colorado but is always willing to help his parents with a project whenever he is in town.

Hosting holiday dinners is another area that Kay has had to scale back on.

“The holidays have changed quite a bit for our family. I always had Thanksgiving and Christmas Eve here, but it’s just too much anymore.  Now that my granddaughters have boyfriends, it adds to the total number of people,” Kay said.

The extended family still celebrates Christmas Eve at the Slade’s home but now the children and grandchildren set up and take down tables and chairs and everyone brings a dish to pass.

Saving money on household expenses, health insurance, groceries and utilities allows the Slades to remain in their home.  When a huge ash tree in their back yard died, the upfront cost to remove it was well over $2,000.

“We found out that the forestry department in Rockford has started a new program where they will mark the tree to be removed, then the homeowner gets estimates and the company with the lowest bid will come out and remove the tree,” Kay said.

“The best part of this program, is that the cost of having the tree removed is billed to us in monthly payments on our water bill over the course of three years.”

Staying active, making necessary accommodations and accepting help from family and friends when needed are crucial for seniors who wish to remain in their own homes.

“If all I wanted to do was sit in front of the television, I guess I would feel differently about selling this house,” Jack said.  “Every day, when I get up, there are things that I need to do; I know it won’t last forever, but for now; I really like it.”