Crowds wait in front of the Sunnyside Dispensary to purchase recreational marijuana. (Photo by Lynne Conner / for Chronicle Media)

Motorists traveling on a portion of McFarland Road on Rockford’s northeast side have recently witnessed heavier vehicle traffic, a large security presence and an increased number of pedestrians along this normally quiet stretch of roadway.

Small business owners in the area attribute the rise in activity to Sunnyside Dispensary, a medical marijuana distributor which added recreational marijuana sales on Jan 1.

“First of all, no one anticipated the traffic that (the dispensary) would create and secondly, the disruption to this area has been an issue, with people walking between the businesses,” said Luis Pavez, owner of Zavius Jewelers, which is two doors down from the dispensary.

“My clientele are intimidated by marijuana users walking between parking lots with bags from the dispensary.  These are not the kind of people we’re used to seeing in this area.  They are users and they are addicts,” he said.

Pavez likens the heavy traffic caused by Sunnyside Dispensary — currently the only recreational marijuana business in Rockford — to the rush that would be created by having only one liquor store in town.

Attempts to contact the dispensary for comment were unsuccessful. But collateral traffic and safety issues are apparently are being addressed by the company.

While he is grateful for the armed security force patrolling the parking lots of businesses, Pavez said seeing armed guards in the lot of his business is unnerving to his customers.

“Not everyone knows that the dispensary is so close to my business and my customers are not used to being stopped before entering the parking lot and questioned about where they are going,” he said. “It’s shocking to them to be stopped and questioned about their actions.  There have also been instances of dispensary customers urinating outside in public sight and leaving garbage in the landscaping.

“The bottom line is that having a recreational pot dispensary in this area is not improving the business climate for us,” Pavez added. “The people who come to this area to buy marijuana are not buying jewelry.”

First Ward Alderman Dr. Timothy Durkee, has been active in helping surrounding businesses adjust to the presence of the dispensary located within his ward.

“I was out at Sunnyside on the day they opened, Jan. 1, and I have been there pretty much every day since then to observe what’s happening.  I did visit with the business owners as well,” he said.

“Most other business owners see Sunnyside as just a neighboring business along McFarland Road, but they are struggling with the high amount of traffic, crowds and dispensary customers and jamming up their parking lots,” Durkee added.

“Some of the dispensary patrons, who were parked in a neighboring business’s parking lot, were pretty rude and made threatening gestures to a female building owner,” he said.  “When I was there; I saw some people park where they shouldn’t have; I said something to them and was also threatened.”

Durkee said those parking issues and behavior were confined to a “small minority” of customers. Still, business owners fear a negative impact on their firms.

“We have to pay attention to the surrounding businesses to ensure that this doesn’t become a chronic problem,” Durkee said.

The placement of the dispensary among upscale businesses along McFarland Road was not entirely controlled by city government.

“The medical marijuana part of Sunnyside Dispensary is under our local ordinances and that (business) was in place before the state legalized marijuana for recreational use,” he said.  “So, the state allowed existing medical dispensaries to sell recreational marijuana under state statutes.  It wasn’t anything the city really did.”

With a future recreational marijuana dispensary set to open on Sandy Hollow Rd. in southeast Rockford, Durkee sees this as a way to ease the traffic and crowds along McFarland Road. 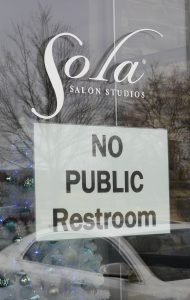 Sola Salon Studios shares a building with Sunnyside Dispensary. The salon has posted signage to keep their facilities for salon clients only. (Photo by Lynne Conner / for Chronicle Media)

“This issue came up at City Council.  A number of aldermen voiced the desire to keep any future (recreational marijuana) dispensaries out in the more industrial areas of Rockford, the less populated areas,” he said. “This is their intent going forward.”

Since the first week of January, Metro Enforcement, a security company contracted by the owners of Sunnyside, has been providing armed guards and parking lot control to the businesses surrounding the dispensary.

Tim Gentry, COO of Metro Enforcement, acknowledges that there have been some “incidents” during this time but that things are running fairly smoothly.

Metro Enforcement officers are typically parked at the entrances of businesses surrounding Sunnyside and stop incoming cars to make sure patrons of the dispensary are only parking in designated areas.

“There are some people who don’t want to tell us where they are going, but I think they are still paranoid that we are surveilling people going to buy marijuana,” Gentry said.  “It is legal now in Illinois; so we don’t care about who’s going to Sunnyside.  What we’re trying to do is preserve the parking rights for neighboring businesses and make sure that their customers have a place to park.”

Since parking spaces in Sunnyside’s lot are extremely limited, Gentry said that other businesses in the area with larger parking lots have leased spaces to the dispensary.  “I know there is dispensary parking at JMK Nippon, at least 125 spots at Franchesco’s Ristorante and around 300-400 spots at the call center down the road across from Famous Dave’s BBQ.”

Pedestrians walking from other parking lots to Sunnyside Dispensary, have created an overabundance of foot traffic in the area, something Gentry said other business owners “do not want at all.”

“I think the surrounding business owners want the vehicle traffic and pedestrian situation more under control and that’s what we’re trying to provide,” Gentry said.  “We just want to have a safe, controlled environment for everybody that comes to this area, no matter what business they are patronizing.”

Gentry credits Sunnyside for taking measures to ease the concerns of fellow merchants.

“The dispensary has been very kind to the businesses through here. They’re trying to be a good neighbor.  I do know that.  They hired us, they’re paying us directly to provide security services for all these surrounding businesses.  They’re trying to do the right thing.”

Erikka Walker, owner of Erikka Walker Salon at Sola Salon Studios, was working on Jan. 1 when Sunnyside opened to recreational use customers.

“I really haven’t had any negative experiences or encounters with dispensary patrons,” she said.  “The biggest line I saw at Sunnyside was on New Year’s Day, which is typically a closed holiday for businesses in the area.”

Sola Salon Studios shares the front half of the same building as Sunnyside Dispensary.

“Every time I’ve been outside, I’ve seen people waiting in line at the dispensary, but everyone was calm and it was pretty quiet,” Walker said. “Anyone looking for the dispensary who has come into the salon by mistake has been super polite and just headed back out and down the sidewalk to Sunnyside.”

Walker said that texting her clients prior to their appointments to inform them about the security detail in the salon parking lot and posting this information on her social media accounts, are the only business adjustment she’s had to make since Sunnyside opened for recreational pot sales.  She adds that the increased foot traffic around the building may lead to more salon clients in the future.

Walker has not heard any negative comments from her clients about the dispensary being so close.

“I think our biggest concern has been people getting into the parking lot because no one is prepared to see a guard as they are driving into the lot.  But I think that now, there’s a rhythm to that and once people are in the salon, it’s business as usual,” she said.

“As a city, we encourage business growth and expansion.  But what we have to do is find ways to deescalate possible problems and then find a workable solution,” Durkee said.  “In this particular case, there were some very frustrated business owners; but there was also a pretty significant attempt by Sunnyside to get a handle on the situation and take steps to be a good neighbor.”

Sunnyside’s recreational business  had a big opening, maybe too big. According to the company’s Facebook page, viewed on Jan. 16, the dispensary’s inventory was now being limited strictly to medical users.

“Since launching adult-use cannabis in Illinois, demand has been historic,” Sunnyside reported on its web page. “We can’t thank you enough for your excitement and passion for our products. Due to that demand, our inventory on-hand is critically low.

“Due to low inventory, we’re suspending adult-use sales across our (Illinois) stores today,” the company said.