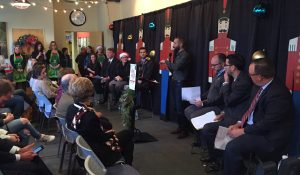 City and tourism officials and sponsors gathered at Rockford Area Convention and Visitors Bureau last week to talk about the expanded version of Stroll on State, set for Saturday, Nov. 25 in and around downtown Rockford. (Photo by Jack McCarthy / Chronicle Media)

Stroll on State will feature some new elements as the popular holiday kick off celebrates five years in and around downtown Rockford next month.

But the main focus remains unchanged as city officials, downtown businesses and restaurants and dozens of volunteers come together to welcome residents and visitors to the Christmas season.

Officials announced a series of enhancements at a press conference last week for an event that attracted around 30,000 people the first year and ballooned to more than 75,000 in 2016.

The 2017 event, set for Saturday, Nov. 25 will have an earlier start, offer an expanded parade, more live entertainment and even a new five-kilometer run.

Stroll on State and downtown business have grown in tandem over the past five years.

“The growth has been substantial, you all know what we started with,” said John Groh, president/CEO of the Rockford Area Convention and Visitors Bureau. “The first year and the second year we spent a lot of time as volunteers putting up wrapping paper over windows where nothing was behind and trying to dress up a couple of our streets and sections of State Street.”

“Now new life is up and down State Street and Main Street and throughout downtown.”

Stroll on State officials have announced five enhancements for the fifth year.

A bigger and reimagined holiday parade kicks off at 3 p.m. and has grown from simple horse-drawn carriages bringing Santa to a tree-lighting. The expanded parade is expected to include high school marching bands, floats and some surprises. Eleven floats are already planned.

More food and beverages are on tap. Two Frosty’s Bites and Brews outdoor markets will offer  treats from 34 different local food trucks, restaurants and other vendors. One market will be at the corner of East State and Water streets with another at the parking lot at the corner of North Main and Mulberry streets.

Other popular attractions are expected back, including ice sculpture carving, a fire-and-ice display combing blocks of ice and bonfires, S’mores stations at three locations and two spots to take horse and wagon drives.

Rockford’s River Lights show returns along the Rock River, the traditional tree lighting and fireworks show takes place around State and Wyman streets  and kids can catch Santa Claus at not one, but two locations.

Downtown parking decks will be open and some street parking will also be available. There will also be three remote parking lots with shuttle service from 2-9 p.m. from the YMCA at 200 Y. Boulevard, Hartland Community Church at 1280 S. Alpine Road and Illinois Bank and Trust and 4048 E. State St.

Illinois Bank and Trust is the Stroll on State presenting sponsor. Commonwealth Edison and the National Electrical Contractors and International Brotherhood of Electrical Workers Local 364 are premier backers.