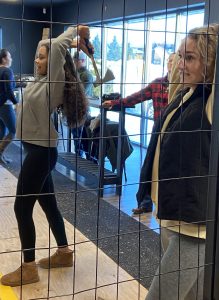 Have an ax to grind?  Sick of snow?  Hate winter?  Or are you looking for a unique way to spend date night?

If you answered yes to any one of these questions; a new Rockford entertainment venue may be just the solution.

“Stacy and I had gone in to the (Chicago) suburbs for a movie and decided to try out ax throwing.  We fell in love with it right away,” Wendler said.

“This sport is super safe.  It’s not dangerous at all; you’re throwing axes at a wall,” he said.  “If you follow the rules and the guidelines that we have and listen to our coaches who train, guide and oversee your visit; there’s nothing to worry about.”

The ax throwing lanes are similar to batting cages and can be occupied by 12-14 people at a time.  Teens aged 13 and up are also permitted to throw as long as they are accompanied by a parent or guardian.

Ax throwing sessions can be booked in advance and are available in 60, 90 or 120 minute increments.  Axe Marks the Spot also offers patrons two throwing targets per lane instead of one which is different than other businesses

“When you come in for a session with a friend, there will be two targets to throw at.  Other places only have one target which clearly cuts down on your throwing time.  So two people can throw at the same time which is definitely a plus,” Wendler said. 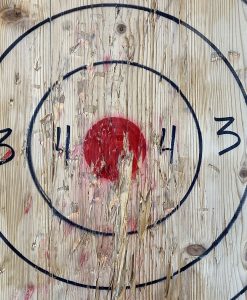 Up close look at gashes on a target from axes. (Photo by Lynne Conner / for Chronicle Media)

The ax throwing targets are comprised of five wooden boards side by side which are secured to a background wall and then painted with a circular target and bullseye.  The individual boards are changed approximately two times per weekend as ax throws chip away the wood causing the axes to fall.  During each ax throwing session, the targets are sprayed with water to help the axes stick into their wooden targets.

Opening his establishment during the winter months, Wendler commented, provides a new and unique entertainment venue for individuals or groups looking to change up their weekend routine.

“For a date night, ax throwing is a good option because it’s different.  Most people think of date night as dinner and a movie, dinner and a movie; and you’re limited as to what you can do,” he said.  “Ax throwing is a great entertainment choice year round because weather isn’t a factor and planning is as easy as reserving a time.”  Axe Marks the Spot does take walk-in patrons, however Wendler encourages reserving a time to eliminate unnecessary waiting.

“In addition to couples on a date night, we’ve had groups that come in like bachelor or bachelorette parties, gender reveal parties, divorce parties and birthday parties,” he said.  “If there’s ever a reason to blow off some aggression and have fun, ax throwing is it.”

For the incensed, outraged and furious ax throwers, Wendler does have some ground rules.

“Even though I haven’t found a law that prohibits throwing an ax at a person’s photograph, we don’t allow that at our venue.” 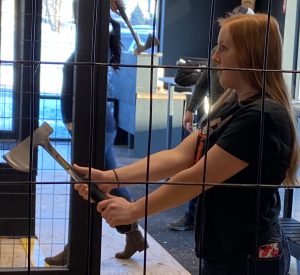 “Legally, it just doesn’t sound right for us to let people throw axes at photos of ex-boyfriends, ex-girlfriends or ex-spouses,” he said.  “We’ll allow people to throw an ax at an old hoodie or some object from an ex but not at a picture of that person.  Most people come in to Axe Marks the Spot to have fun and then they realize what a stress reliever ax throwing is, so it’s a win-win.”

Wendler said patrons are welcomed to bring in their own food and non-alcoholic drinks as alcohol is not served or allowed at the venue.  Axe Marks the Spot can also accommodate corporate groups that bring in catered food. Charity groups have also booked blocks of time for ax throwing and then taken donations for the public to participate.  Future plans include setting up ax throwing leagues and tournaments and expanding food and drink options.

Axe Marks the Spot does take reservations for throwing sessions on their website, axethrowing815.com and is the business is open Thursdays and Fridays from 4:30 p.m. to 9 p.m., Saturdays from noon to 11 p.m. and Sundays from noon to 5 p.m.