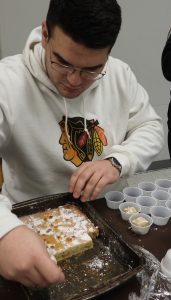 Visitors to the Newman Catholic Student Center in DeKalb indulged in the art of diverse dining as they prepared to enter the season of Lent.

Foods from 15 different countries were featured at an International Mardi Gras dinner held at the Newman Catholic Student Center adjacent to the NIU campus in DeKalb on Tuesday, Feb. 25.

The gathering, in its fifth year, is a celebratory feast for the Newman community before the Christian season of Lent began the next day on Ash Wednesday.

“Being a state university, we have a lot of diversity on campus and many of the students wanted an event that would showcase their ethnic heritage,” said Denise Sanders, campus minister at the Newman Center.  “Rather than highlight one nationality, the students wanted to have a pot-luck dinner where they could cook an ethnic dish from their culture and share it with the community.”

Some of the countries represented at the International Mardi Gras dinner were Croatia, Bosnia, Venezuela, Colombia, Germany, Italy and Kenya.  Sanders said that the number of nationalities varies from 14 to around 27 each year and that the dinner draws people from all age groups.

For NIU student Tony Bilic, who was born in Croatia, the International Mardi Gras Dinner is a way to share his heritage with fellow students and the Newman Center community.

“It’s very special for me to bring some of my Croatian background to the United States.  When my family and I immigrated to the States, we were welcomed with open arms and we were given a foundation to build our lives on,” he said.  “By sharing some foods from my culture with others, I hope to keep my Croatian heritage alive.”

Melissa Mendoza, a native of Venezuela, prepared empanadas for the Mardi Gras dinner. 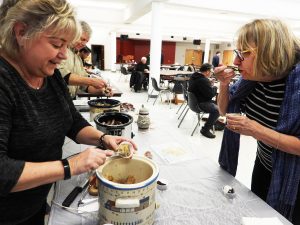 “It’s exciting for me to show some of the best food from my country to others in the U.S.  I love my Venezuelan culture and I love learning about the cultural backgrounds of those in the Newman Center community,” she said.

Newman Catholic Student Center administrator, Father Kyle Manno offered a blessing at the start of the dinner.  Manno encourages his parishioners to see the sacrifices, fasting and almsgiving of Lent as opportunities for personal and spiritual growth.

“Engaging in more personal prayer is always a good thing to do during Lent,” Manno said. “Make a point to read one of the Gospels.  Just taking it a chapter a day would allow you to read through the book of Matthew during Lent.  Doing some charitable work like helping out at a soup kitchen or homeless shelter are also both good experiences to try.  The goal is to do something outside of the ordinary.”

The dinner served around 100 people.