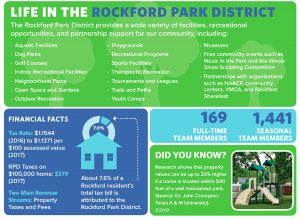 After concluding a six-month community-led master plan process, the Rockford Park District has revealed a five-year strategy to reinvest in several park district programs and services.

The process included “visioning sessions” held throughout the city, where citizens could ask questions and provide feedback.

“We received some very specific guidance from our community in terms of what they want their tax dollars going toward,” said Rockford Park District Executive Director Jay Sandine. “Getting back to some of our core services, focusing on youth, teens, and families and downsizing the District is something we heard loud and clear.

“Heading into 2019 budget planning, the District is anticipating a nearly $800,000 deficit so in order for us to add and reinvest in what our community is telling us, we have to reduce our footprint and live within our means. Our goal is to have a vibrant park system that is helping to improve the quality of life for the citizens we serve,” he added.

Park District budget woes stem from a declining tax base and a reduced revenue stream due to population and demographic shifts within the district.

Several proposals for helping the District’s bottom line were offered through community feedback and are now being reviewed by the RPD’s Board of Commissioners. The commissioners are set to decide on the priority of the proposals at their Sept. 11 meeting and then implement a master plan in the next five to seven years.

The money-saving proposals include both adding programs and services to the RPD and eliminating or reducing others. Some revenue generating ideas include:

An investment in trails and the creation of world-class silent sports trail system at Atwood Park;

The creation/enhancement of destination parks which could include water features, family activities, events, camps, etc. and finishing development of key assets at Levings Park, Southwest Park and Lockwood Park;

Ideas for reducing the RPD’s footprint while saving money include:

Amid the RPD’s financial concerns, the brand new The Rockford Bank & Trust Pavilion at Aldeen Golf Course, which opened in mid-August, is poised to be an important source of revenue for the park district owned golf course going forward.

According to Laura Gibbs-Green, public relations manager for the Rockford Park District, the Pavilion is anticipated to generate around $150,000 worth of income annually.

“That profit will be reinvested into Aldeen to pay off the Rockford Bank & Trust Pavilion mortgage, which is a small part of the Pavilion’s overall cost to build. Over two million dollars was donated for the construction of the Pavilion by: Rockford Bank & Trust, Rick and Lana Engan, the Norris & Margaret Aldeen Foundation and Giovanni’s Restaurant & Convention Center,” she said. “The RPD will also receive 100 percent of the facility’s rental fee and a portion of the profit from food and beverage sales.”