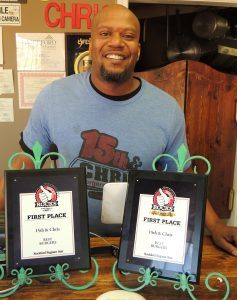 James Purifoy displays some of the local awards he has received for his restaurant. (Photo by Lynne Conner/for Chronicle Media)

Every hamburger James Purifoy creates at his restaurant — 15th & Chris — reminds the former convict of his transformation from gang member to thriving entrepreneur.

That Purifoy’s downfall and later success happened within the same neighborhood is only a part of his incredible story.

Purifoy, born and raised in Rockford,  grew up amid hardships and financial struggles.

“I’m not from a rich family, my Mom was a single mother with six kids who didn’t finish high school, so she did not have many career choices,” Purifoy said.  “We lived in every part of the Rockford Housing Authority’s developments from Concord Commons to Fairgrounds to Orton Keyes and I experienced all of the things that came along with that inner city lifestyle.”

Following his 1993 graduation from Jefferson High SchooL, Purifoy became involved with neighborhood gangs and found himself living a life of crime and violence.

“I did a whole bunch of stuff that I wish I could take back,” he said.  “I shot some people.  I made bad, bad decisions and ended up serving 10 years of a 21-year sentence for aggravated battery with a firearm.”

“I tried to equip myself with all the education I could and studied auto technology, custodial maintenance and ended up in culinary arts,” he said.

“I’ve always been in awe of how food is prepared and used to sit in the kitchen and watch my mom and grandmother make dinner and cook for the holidays,” he added.

“I was always intrigued by the chemistry of food and how mixing certain liquids and spices together tenderizes meat.  I used to put peanut butter on bread, top it with brown sugar and try to make peanut butter cookies.  Cooking became my favorite hobby. I just wanted to go into the kitchen and make something magnificent for me.”

After leaving prison, Purifoy found it difficult to find gainful employment and worked a series of odd jobs before earning a commercial drivers license and starting his own company, JFP Trucking.

“I was always looking to the future and I didn’t see myself driving semis when I thought about my five-year plan,” he said.

“Every time I would ask myself, ‘What do I want to do?  How do I want to spend my time?’  I was chopping onions, chopping bell peppers…I was always cooking,” Purifoy said.  “I would wake up and go to sleep watching Food Network … and there was my answer. My passion is cooking.”

With encouragement from his friends and family, Purifoy ventured into the food service industry in 2014, determined to see his passion thrive in an unlikely location.

“I had choices when it came to where my restaurant was going to be, but I chose to open the business in my old neighborhood because I wanted to go back home,” he said. 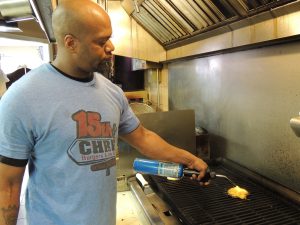 James Purifoy creates one of his hamburger specialities at the 15th & Chris Grill. (Photo by Lynne Conner/for Chronicle Media)

Billed as Rockford’s only Build Your Own Burger Restaurant, 15th & Chris (www.15thandchris.com), is located at 201 15th Ave, on the corner of 15th Ave. and Christina Street in Rockford’s near southeast side.

The restaurant’s building formerly housed Tip of the Iceberg ice cream shop and was next to Penguin Foods.

15th & Chris is one of a just few eateries in that area and is near the RHA’s Blackhawk Courts development and Beyer Stadium.

By choosing to open a business in the same locale that contributed to his criminal past, Purifoy is consciously trying to bring back neighborhood nostalgia and optimism.

“This building had been abandoned for over 25 years and it took a lot of work to get everything up to code,” he said.  “I used to come to this place when I was a kid and get ice cream.  It was an eyesore for so many years, but now that we have made it into 15th & Chris, we hear stories from so many people who have fond memories of this building and this area.”

Purifoy also hopes that the presence of 15th & Chris in his old neighborhood generates optimism in the community.

“Why not go back to my neighborhood and open a restaurant?  Maybe this is a way to get people to support you and believe in revitalizing this area.  I want to overwhelm people with hospitality and show them the positive side of our community.”

The menu at 15th & Chris focuses on specialty burgers; all of which are Purifoy’s original creations, with some named after long-time Rockford institutions.

“I see a burger as a blank canvas,” Purifoy said.  “I like to be creative and draw from different areas of the country, different ethnicities and see what exciting flavors I can put together.  My menu is crazy.

“I love the burgers I serve,” he said.  “I can come to work any day and eat a Machiavelli burger or a Gunite burger (named after Rockford’s Gunite Corporation).  I love the 205 burger (which refers to the Rockford Public School District) and the Wrecker burger is like a sacred cow to me.”

Since 15th & Chris is a seasonal business — open from April to November — Purifoy spends the rest of the year touring various cities in the U.S. looking for unique ingredients and food combinations to spice up menu.

“I just love the fact that if you go to Kansas City versus North Carolina there are at least two different flavors of coleslaw,” he said.  “All these different regions of the country have their own tastes and flavors.  I want to embrace that and see how I can incorporate it into my burgers.”

Purifoy hopes that his interest in regional flavors and unique tastes leads 15th & Chris to someday become a dining destination for Rockford.

“People that leave Rockford and come back to visit always want to eat at Lino’s or Beef-a-Roo or Franchesco’s, because these restaurants are Rockford traditions.  That’s what I would like to see 15th and Chris become, a local tradition.”

As the product of an inner city neighborhood with a criminal past, Purifoy sees his entrepreneurial success as a way to inspire others and give back to his community.

Last year, he was the subject of a feature for CNN Money’s “My American Success Story” and he has been featured on Chicago’s WGN Channel 9 News.

For all the adulation and local celebrity status Purifoy has experienced, he remains humble to his family roots and philanthropic to the Rockford community.

“Owning a business means that I’m writing the book, I’m still writing my story.  Having that media exposure has given me the opportunity to go back to prison and talk to incarcerated youth about the respectfulness of accountability,” Purifoy said.

“Prison doesn’t have to be the end of the story.  You can pick your pen up and write your chapters the way you want them to be with passion as your guide and with success as your goal.”