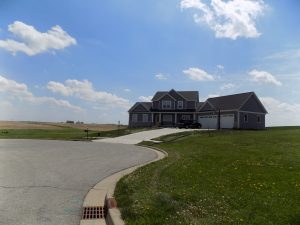 On March 21, George Mori, president of SolAmerica of Atlanta, Ga. applied for a special use permit to operate a 25-30-acre solar farm on a parcel of land just south of Lakeview Acres Subdivision in Cruger Township. Homeowners were notified May 3 of the May 22 public hearing, and must apply seven days before the hearing for permission to cross-examine the applicant. (Photo by Holly Eitenmiller / for Chronicle Media)

Plans for a community solar farm on the southern outskirts of Eureka are being met with less than sunny outlooks.

On March 21, George Mori, president of SolAmerica of Atlanta, Ga. applied for a special use permit to operate a 25-30-acre solar farm on a parcel of land just south of Lakeview Acres Subdivision in Cruger Township. The parcel is a portion of 51 acres owned by Metamora resident Robert Hartman, and an underground main leading from one of the city of Eureka’s two wells runs through it.

“All the feedback I’ve heard is concern. There are concerns in terms of the long-term contract. There are concerns with how close it is to the city and that’s also an area that’s showing the most growth,” Eureka Mayor Scott Zimmer said. “There have been more and more homes that have been built over the most recent years in the lake area. It’s been one of the city’s greatest developments, and one of our main water lines runs through that property.”

Gene and Sue Rossetti — Gene until recently served as Ward 4 alderman in the city council —live in a new home on Marshall Road, the southernmost region of the subdivision. Around them are homes so recently built they are still for sale, and another, at the end of the cul-de-sac, is under construction. Their backyards are fields zoned for agriculture.

The Rossettis say they received a letter of notification May 3, six weeks after the application was filed by Mori and Hartman.

“It was our first inkling that any of this was going to take place. We felt we were totally left out of the process,” Sue said.

The Rossettis have filed appearance form, one of two applicants so far according to the Woodford County zoning office. “Most of the people in the City of Eureka don’t know about this,” Sue said. 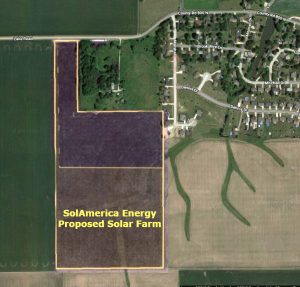 Property owner Robert Hartman of Metamora may lease a portion of property on the southwest border of Eureka to SolAmerica Energy for use as a community solar farm. An underground main leading from one of the City of Eureka’s two wells runs along Hartman’s property, and citizens are concerned about the environmental impact a solar farm may have on the water supply. (Image by Holly Eitenmiller / for Chronicle Media)

The bill calls for 25 percent of Illinois power production to be renewable by 2025, and allows for communities to build 2 megawatt solar farms, which generally require around 16 acres upon which to install 7,000 3-foot-by-6-foot solar panels.

Each project costs developers around $3.3 million to build a 2-megawatt solar farm, comprised of 7,000 solar panels on around 15 acres of land. A solar farm of that size can generate enough electricity to power about 500 homes in a year.

The solar farms may grow, however. In 2021, Illinois will review the success of the project, and allowances may be made for the plants to increase output and install battery rows and other equipment meant to store power.

In the application, SolAmerica describes the solar farm as a “passive” power plant, in which noise levels will not exceed 40-60 decibels, “just above talking level”, as compared to the impact on property values with that of wind farms.

In a letter to Woodford County board members, the Rossettis cited 10 items of concern regarding a community solar farm, including exposure to electromagnetic radiation and its impact on property values.

“The owner of the land does not live on the land and is not a resident of the City of Eureka or Cruger Township,” they wrote. “Consequently, the owner does not have any vested interest in the aesthetics/health of the nearby community.”

SolAmerica filed a second application for a special use permit to build a solar farm in a rural area of Clayton Township near Minonk. Both applications will be considered at the May 22 public hearing.