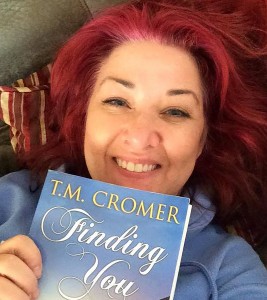 Eureka resident Tara M. Cromer holds a copy of her book, “Finding You.” Cromer will sign copies of the book and talk about her journey to publish it at the Eureka Public Library on Saturday, Feb. 27. (Photo courtesy of Tara M. Cromer)

After shelving her dream to write a book for 20 years, Tara M. Cromer now has two titles published with more in the works.

The Eureka resident will sign copies of her first book, “Finding You,” and talk about her journey to publish it at a free event at 11 a.m. Saturday, Feb. 27, at the Eureka Public Library.

Describing her book as romantic suspense with a hint of paranormal, Cromer credited several authors with helping her “walk through this minefield of publishing and marketing,” including Sabrina York and Cynthia St. Aubin.

“Publishing was a learning curve for sure, and self-publishing is actually very interesting,” Cromer said. “It was definitely on-the-job training. I was lucky enough to have author friends giving me advice, and I’m happy to pay it forward and help other authors who want to publish.”

Cromer first published “Finding You” last September as an e-book and published print copies a few months later through Amazon’s CreateSpace program. The book is now available online through iTunes, Barnes and Noble and Kobo Books and also can be checked out at the Eureka Library.

An eight-year transplant to Eureka after living in Florida for 25 years, Cromer chose the Sunshine State as the setting for “Finding You.”

“I actually started it when I was 25. My husband, Mark, who was my boyfriend at the time, had gone out of town on business, and I had a nightmare and woke up wondering what I would do if he never came back. That became kind of the basis for the book,” she said.

“I literally wrote this story about 20 years ago, and then I kind of shelved it. I also wrote other stories and shelved them, too, because when you’re young you have no confidence,” Cromer added.

While she’s taken creative writing classes over the years, Cromer has worked in a variety of fields such as sales, human resources and administrative assisting. She even owned her own coffee kiosk for a time.

Complications from fibromyalgia forced her to stop working a few years ago, and boredom nudged her last spring to find a creative outlet.

“I took out the old story and dusted it off, but I had to totally rework it because 20 years ago we didn’t have the technology we do today with cell phones and all that,” Cromer said.

She enlisted help from her cousin, Jamie Bullock, to photograph the bridge at Florida’s Flagler Beach Pier, which graphic designer friend, Heather Neal, then turned into the book’s cover.

With just under 40 favorable reviews so far on Amazon, sales of “Finding You” have been respectable, Cromer said.

Cindy O’Neill, the Eureka Library program coordinator who asked Cromer to give a program there, said she found the story line and characters so engaging that she was hooked from the first page.

“The story begins with the blooming romance between Samantha and her older brother’s best friend, Michael. They form a great life together, but then tragedy strikes. Cromer does a wonderful job at exploring Samantha’s devastation and her long, slow climb back to wellness.In the story, Samantha is helped along the way by both her family and her doctor, who also becomes a good friend. Their friendship offers the promise of love again, but Samantha is still haunted by unanswered questions regarding Michael’s death. Cromer keeps the tension and questions rippling throughout the book until literally the last breathtaking page. I could not put it down,” O’Neill said.

The main character’s sister, Annie, makes an appearance in Cromer’s novella, “The Nanny Crisis,” which she published last month. The author is currently working on two more books, one of which she hopes to have published by April.

Cromer said she considered sending the book to established publishing houses but didn’t, not only because of the difficulty of breaking into that industry but also to retain control of her work and earn a higher percentage of sales.

“When I was exclusive with Amazon for the first 90 days, I got 70 percent of my sales,” she said. “You’re not going to get that with a publisher. Publishing is taking on a whole new format.”

A recent report by Author Earnings, a website that looks at publishing trends, confirms that. “It’s apparent that indie self-publishing remains as viable and robust a publishing option as it was a year ago, and an increasing number of authors—perhaps even the majority, according to Digital Book World’s 2015 publishing survey—now see indie self-publishing as their first choice, and traditional publishing as a backup plan,” states the report at www.authorearnings.com.

Those planning to attend Cromer’s talk at the library Saturday are asked to register by calling (309) 467-2922. For more information on Cromer or to sign up for her newsletter visit www.tmcromer.com

The library will also host author Debbie Hand of El Paso at 10 a.m. March 12 in a discussion of her book, “Helping Your Friend Through      the Storm: Understanding the physical, emotional and spiritual ways that you can help others through the difficulties in their lives.”

O’Neill said the book—self-published through Christian-based WestBow Publishing–is rooted in Hand’s own experiences recovering from brain surgery to correct epileptic seizures and two bouts of breast cancer. It’s meant to be a guide for people who want to help when loved ones face tragedy.

“I haven’t had a chance to read this one yet, but the subject matter is so important, that I know it will be a very helpful book to many people,” O’Neill said.