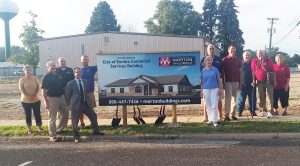 The City of Eureka has officially broken ground on the Combined Services Building at 111 W. Court St. On Aug. 19, Mayor Scott Zimmer and the City Council took up shovels and tossed ceremonial piles of dirt to usher in the coming construction.

“This new building will serve us in many ways, when it comes to heating and cooling and roofs, infrastructure and accessibility,” Zimmer said. “Everything is based on needs assessments, including what our city needs in terms of space to serve everybody best.”

The Combined Services Building will house the police department and city hall, both of which are currently operating from aging buildings. Neither building meets the Americans With Disabilities Act standards, which, in an of itself, has posed serious problems for both departments.

Morton Buildings, Inc. of Morton will begin construction during the second week of September and the new building should be complete by January.

“My main issue is, I just want a building that’s accessible for people,” Eureka Police Chief Alex Collinge said in April. “If somebody has a disability I don’t want that to keep them from coming in. You want your government buildings to be accessible to everyone.”

When outdated HVAC equipment tripped the carbon monoxide detector alarm at the police station last winter, the building had to be evacuated. Among the evacuees, Collinge said, were a group of people who were summoned from out of town for interviews.

At the city hall building on Main Street, there’s only room for for a smattering of chairs for the public to sit in, and the council area is just as cramped. The small set of concrete stairs makes it impossible for anyone in a wheelchair to enter.

“I think the greater benefit will actually be for city hall, they that small space with nowhere for people to sit, but both sides will benefit,” Collinge said. “Any city-owned building is infrastructure, and why sink more money into repair, when a more efficient, ADA-compliant building can be built for less?” 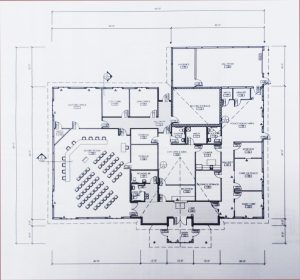 The new City of Eureka Combined Services Building will house the city council chambers, city administration and the police department. The spacious board room will feature seating for 64, and will be handicapped accessible, unlike the current, aging building. (Photo by Holly Eaton/for Chronicle Media)

On April 15, the City Council approved its annual budget, which included building allowances of $625,000 each for administration and police. The $1.2 million is already in the city’s savings account, Zimmer said.

“The city has done a great job of staying on top of the budget and being cautious on spending, and we’re at a point now, when it comes to our facilities, to invest some of it,” he said. “The money is in savings, we’re not borrowing money, and we did not adjust real estate taxes for the money.”

Blueprints from Allied Design Architectural and Engineering Group of Morton show seating for 64 in the council chambers, with an adjoining office for the the mayor and city clerk. The layout for the police department appears to be designed for efficiency.

Both departments will be joined by a small commons area that leads to a shared reception area. Easily-accessible public restrooms will be by the commons area, near the city council chambers.

Once the new building is completed, the old police station will be demolished. The city hall building will be sold, and it’s likely Woodford County will have the option to purchase it first, before it would go to market.

“It’s going to be a nice project and we’re happy to be part of it,” Ken Jackson of Morton Buildings said at the ceremony. “We’ll bring another quality building to Eureka that’s going to serve the city for a long time.”