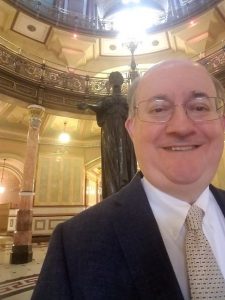 Junius Rodriguez, Democratic nominee for the 18th Congressional District, visited the state capitol after the March 20 primary elections for a public radio interview. Rodriguez plans to host two weeks of town hall meetings, one week in May, the other in August in which he’ll hold two meetings per week day, and one meeting on Saturday. (Photo courtesy Junius Rodriguez for Congress)

Congressmen shouldn’t make voters feel like Dorothy and her friends at the doors of Emerald City, pleading for an audience with the great and powerful Wizard of Oz.

In May 2016, Rodriguez was picked as a vacancy appointment by a group of Democratic county party chairmen to run against LaHood. Rodriguez garnered 28 percent of the vote. Not bad, he said, considering that he ran a short campaign.

This time, Rodriguez plans to open his calendar and hit the road in a series of town halls aimed at reaching out to voters of all party preferences.

In early April, he attended a “remarkable” Eureka High School March for Our Lives town hall at the college. Voters from six of District 18’s 19 counties were present, and Rodriguez answered questions for 90 minutes. LaHood declined an invitation to the event due to other obligations.

“I think that the voters in 2018 are really hungry for that kind of opportunity to talk to a candidate, challenger or incumbent, and put people on the spot,” Rodriguez said. “There were individuals who attended, Independents and Republicans, to size me up and have a chance to evaluate me on a basis of how I answered their questions. I look forward to those kinds of opportunities. This is how representative democracy is supposed to work, it’s not just for Dems, it’s for everyone to ask questions and find out where I stand on a wide variety of issues.”

He is sincere about reaching out to the voters, he says, planning to host a more town halls in spring and summer.

One week each in May, and again in August, Rodriguez will host a series of town halls in which he’ll visit two smaller towns per day, Monday through Friday, with a single larger venue to follow on Saturday, for a total of 11 town hall meetings in one week. Each town hall will last around 90 minutes and questions will not be pre-screened.

“These Weeks of Town Halls can provide us with an opportunity to rejuvenate citizen democracy in the 18th congressional district,” he said. “It’s how we can restore confidence in our system of government, and it’s how we will win, and ultimately serve, come November 2018.” 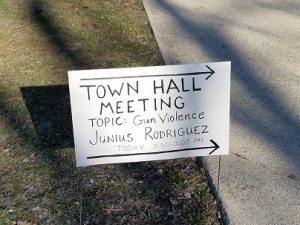 The spotlight was on gun violence and school safety at the March for Our Lives meeting in April, but Rodriguez said prime issues in the 18th district are economy and job issues.

The district began to flounder, he said, after former U.S. Rep. Aaron Schock was elected, then resigned in scandal, and was followed by LaHood; two Republican congressmen whose priorities, he believes, were not the same as their constituencies’.

“We’ve faced a lost district. Two members of congress over a decade who have looked beyond this district, instead of serving the real needs we have here,” Rodriguez explained. “One of the things (Schock) proved is being capable of fundraisers, and he was one of the best they had. His focus was outward and on raising money for his own coffers. Then along came Darin, and he raised most of his money from PAC, corporate donors and lobbyists.”

According to demographic statistics, he said, the district is trending in the wrong direction and losing population at a very rapid clip.

“We’re not creating jobs, we’ve seen job loss. Young people want to know that if they stay in their small communities and know that they can make a life for themselves. But many of these young people have to move to get beyond the limitations, and they’re doing that,” he said.

Reaching out to county and municipal governments, he said, is the way to truly facilitate economic growth.

“The heavy lift is at the local level, to make counties and cities more attractive to future employers,” Rodriguez explained. “In terms of congress, what I plan to do is work with a staff member who would act as liaison to every county board and liaison to the larger municipalities and keep tabs on their needs to help them.” 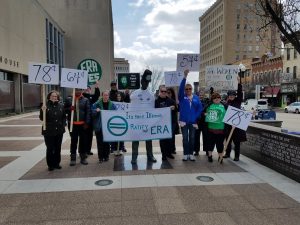 “I was pleased to attend and speak at the ERA Equal Pay Day rally that was held at noon today in Peoria,” wrote Junius Rodriguez of the April 10 rally at the Peoria County Courthouse. Rodriguez plans to dedicate much of his schedule to events that place him in direct contact with voters, regardless of party affiliation. (Photo courtesy Junius Rodriguez for Congress)

He’ll also keep up with the town halls, one every three months or so, after he would take office, he said.

“It’s just an extraordinary thing, if you have so many of these things, it’ll become comfortable and you can assume that at some point people will begin to count on it,” he said.

Rodriguez firmly believes he’ll defeat LaHood in November. Party lines are becoming blurred, he said, and Republican voters are beginning to lose confidence in their party.

“When Paul Ryan said he’s going to retire, that was one of those earth-shaking moments. Republicans are losing control of the House. That’s huge,” Rodriguez said. “I’ve received several calls from farmers who say, ‘Our family’s voted Republican all our lives, but not this time.’ They can’t hold their noses and vote Republican. I think we’ve really reached the tipping point. Just having an ‘R’ by your name is not going to be sufficient, not even with a politically dynastic name.”

What has been done for the ordinary lives of voters, he said, will stand as the litmus test. Rodriguez began campaigning heavily last year, and said he’ll continue to until election day.

“We’re working very hard, this is a very large district, 19 counties, and if a candidate wants to be seen and taken seriously you have to attend the meet and greets, the fundraisers, the county fairs, from here until November,” he said.

For more information on Rodriguez, his campaign, schedule and contact information, visit his Facebook page, “Junius Rodriguez for Congress”, or go to www.rodriguezcongress.com.