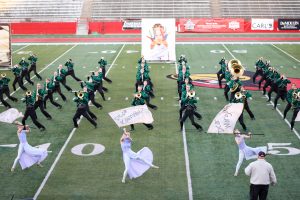 The Eureka High School Marching Band captured its 14th Class 1A title on Oct 22. This year’s show was titled “A Letter to Myself.” (Photo courtesy of EHS Marching Band)

Scoring a 79.3 in preliminaries, and  winning caption awards for High Achievement in Music Performance, Visual  Performance, and General Effect, the band automatically qualified for the evening finals competition based on their class win, but would have made it on their score  even if they had not won their class.

In finals competition, the band earned 12th place out of  15 bands, achieving the highest placement for a 1A band in the history of ISU finals.  The band is led on the field by drum majors Carly Bridgewater and Allison Wetzler,  and by color guard captains Kammie Edwards and Hannah Worthen.

This year’s show was titled “A Letter to Myself,” and featured original music by Alex  Yoder, and drill by Greg Bimm, director of the Marian Catholic High School band.

“Our students really bought into the show as we progressed, becoming the  characters they needed to be and connecting with the audience to heighten the  impact of what they were doing musically and visually,” says EHS Director of Bands  Todd Stalter. “What impressed all of us on staff was the incredible improvement we  saw from day to day and week to week, which was generated by the kids’ desire to  be great every day, to work hard in rehearsals and also on their own, and to  continue building their skills levels. The growth from Band Camp to the final show  at ISU was phenomenal, and that is not an exaggeration,” says Stalter. 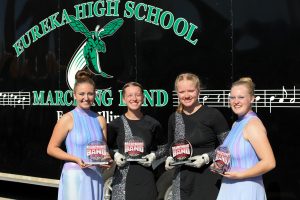 “I  can’t say enough about the staff I get to work with,” says Stalter. “They are  outstanding teachers, motivators, and encouragers, and they make rehearsals and  show days fun, intentional, and rewarding. We are very, very fortunate to have them  here, and we work great together as a team. Many competitive bands have a  multiplicity of staff members, such as mallet techs, brass and woodwind techs, visual  techs, and on down the line. It never ceases to amaze me that we can achieve  performance levels like this with what is essentially a minimal staff compared with  the current state of the activity.”

This season the EHS Marching Band was 5 for 5, winning their classification at  Washington (6A), Morton (2A), Metamora (6A), Dunlap (3A), and ISU (1A), along  with several caption awards at each show.

The band also made finals at Morton,  finishing a close fourth to strong bands from Rock Island, Galesburg, and Davenport, Iowa.