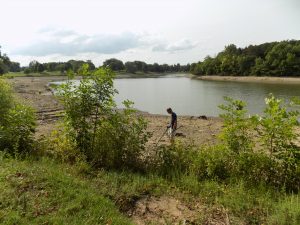 Treasure hunting has begun, now that Eureka Lake has receded dramatically. Residents comb the newly-exposed lake bed in search of lost objects, shells, rocks and other interesting items that may be there. The IDNR does warn against coming in contact with the water during the drawdown. (Photo by Holly Eitenmiller/for Chronicle Media)

Eureka Lake has receded dramatically since the Illinois Department of Natural Resources began draining it Aug. 15 to reduce the population of an invasive carp species.

Carp are a bottom-feeding fish that thrash about in areas where game fish survive and reproduce, killing foliage and stirring up sediment.

Because the eastern portion of the lake has failed to drain properly, City of Eureka Mayor Scott Zimmer said the city will begin pumping the remaining water into a nearby creek at the beginning of September.

IDNR fish biologist Rob Hilsabeck said once the lake refills with fall, winter and spring precipitation, it will be restocked with game fish. 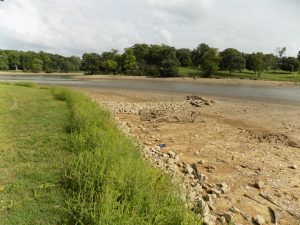 Contrary to what some may have thought, residents around Eureka Lake won’t have to wear clothespins on their noses to avoid the smell of dead fish. A drain was uncapped Aug. 15, and mostly rocks, tree stumps and a small amount of debris have been exposed. If things go as planned, the lake will be restocked with popular game fish, and the carp should be eradicated. (Photo by Holly Eitenmiller/for Chronicle Media) 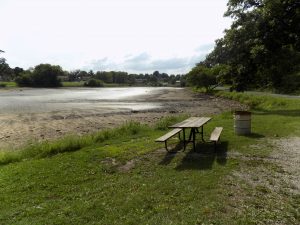 To the west, much of Eureka Lake has drained, leaving most of the lake bed there exposed. There are no signs of carp or other fish, and the lake bottom has served as a haven for blue herons and other birds looking to feast on small prey. (Photo by Holly Eitenmiller/for Chronicle Media)