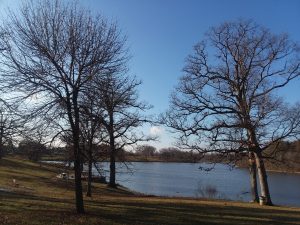 A Dec. 10 photo of Eureka Lake, which was drained in August to eliminate the aggressive carp population. Early December storms brought unexpected rainfall to Eureka and the popular lake is full once again. (Photo by Holly Eaton/for Chronicle Media)

Less than four months after it was almost completely drained of water, Eureka Lake is full again, and residents are thrilled.

“Looked out my window last night and saw lights reflecting off the water again,” Don Samford said. “The ducks were enjoying the larger area just to paddle around on.”

Samford lives on Lake Road, one of many who have homes there and enjoy the view of the lake. By September, the view could not have been more dismal.

Heron and other predators feasted on the fish and some residents searched the newly exposed banks with metal detectors with hopes of finding lost treasures.

Residents likely have the harrowing storms of Dec. 1 to thank for the refill. That day, it looked as if Eureka was directly in the path of the most serious weather patterns headed toward the area.

Much of the destruction, however, occurred in the Christian County town of Taylorville. High winds and heavy rainfall struck Eureka that evening, but the city was spared the brunt of the storms.

“Our lake is back in full force!” Laura Satterfield wrote in a Dec. 4 video post to Facebook. “Thanks to our Mayor Scott Zimmer and everyone else that helped with this project. I look forward to years and years of a healthy ecosystem in our lake and a booming tourism economy in little old Eureka …”

The 30-acre lake was drained to eliminate the aggressive carp that had populated the lake. Biologists with the Illinois Department of Natural Resources used rotenone to kill off the carp.

City of Eureka Public Works Director Rusty Klaus and his crew built more than a dozen fish habitats, and installed them recently in strategic, fish-friendly places around the lake.

“The habitats, they’re just man-made structures, made of PVC pipe to encourage coverage for the fish,” City Administrator Melissa Brown said. “It helps in breeding and, apparently, they’re better than trees, because they don’t catch fishing lines.”

In November, IDNR stocked the west end of the lake with catfish. Later, they’ll add Panfish breeds and, in spring, the bass will be brought in.

Chances are, bass will be on a catch-and-release policy for a year or two, so that they can grow in size and populate the lake. There may be some additional bans, Brown said, simply to ensure the successful re-population of fish.