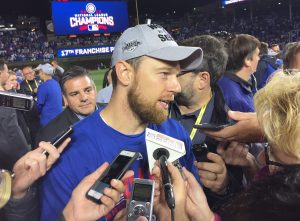 Ben Zobrist is famed for being part of a large family of St. Louis Cardinals fans growing up.

Eureka native and Chicago Cub Ben Zobrist capped off a great World Series by being named the World Series Most Valuable Player.

Zobrist came up with the bases loaded in the 10th inning and the game tied 6-6 and drove in the go ahead run. He then scored another run pushing the Cubs lead to 8-6.

The Cubs shut down the innings in the bottom half of the inning and then celebrated on the field in Cleveland, ending a 108 -year wait for a World Series championship.