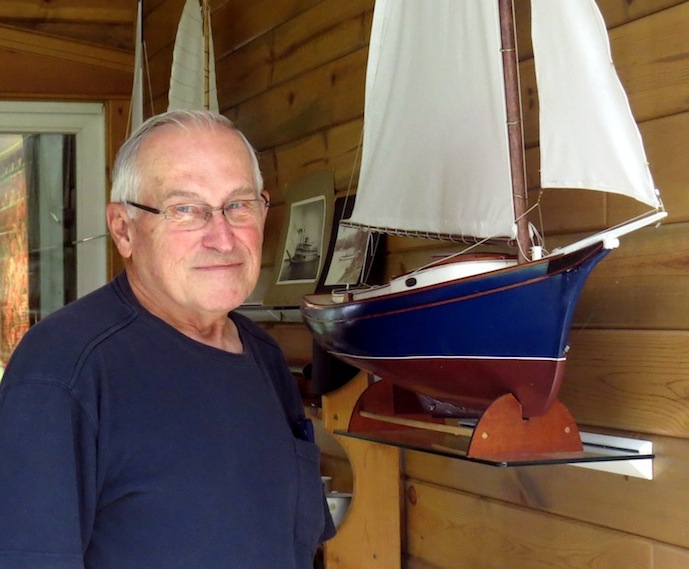 Retired Circuit Judge Richard Baner is shown with a model sail boat that he assembled. He builds one a year in the winter. This one is radio-controlled. Another of his models is a working miniature model steam boat.  Photo by Jerry McDowell.

EUREKA – Richard and Janet Baner arrived back in Eureka in 1965 in need of a home large enough for their five children.

Richard had spent 4 1/2 years going to night school to earn his law degree at John Marshall Law School in Chicago, working during the day as a claims adjuster for Allstate Insurance. Janet raised the kids.

“She (Janet) had a bigger job than I did,” Richard recalls.

They loved the location of the big white Victorian-Romanesque home on Lake Street across from Lake Eureka. Their Realtor had shown them other homes and advised if they bought the one on Lake Street it might be advisable to demolish it because the second floor was unusable due to a fire.

“With five kids you have to look for a fairly good sized place,” Baner said. “He was showing us some big old places, and I think I was making $600 a month, which didn’t buy a lot of house. He brought us by here, and said it’s a really nice location but you might want to tear the house down and build something else. We never did do that.”

The Baners relied on an uncle to do some restoration and now the home has five bedrooms and three baths. Over the years, renovations have included removing a wall, adding a sun room, a back porch and pouring concrete. It’s Victorian-Romanesque because of its semicircular door and window openings.

They also eventually purchased adjacent farm land that Baner once used for a runway to accommodate his hobby of flying ultra-light airplanes.

Baner worked for five years for the Peoria law firm of Heyl, Royster, Voelker and Allen, opening their first office in Springfield across from the Old State Capitol. He started his own law firm in Peoria and became an appointed assistant attorney general working for Bill Scott. He drove to Springfield three days a week.

“Ogilvie (Governor Richard) was quite a guy,” Baner said. “I worked for a couple of his hatchet men. I got an education in state politics that I don’t think has changed much since then.”

Around the time that Baner was becoming interested in politics, he also was learning to fly from WEEK-TV weatherman Bill Houlihan in Mason County. Houlihan would fly him to locations to take depositions.

While Baner, 77, looks back at a successful career as Woodford County State’s Attorney and 16 years as a judge, it hasn’t been without hurdles to overcome.

He recalls with humor the day as an assistant attorney general when he received a call from former Journal Star political writer Bill O’Connell.

“He had looked at all these bills and came across where I had mistakenly billed twice for the same hour,” Baner said. He called me and said, ‘What do you say about that?’ I said, ‘I’ll tell you this. I’m going to refund the money for sure.’ So I never got my name in the paper.”

He added, “Boy I mean I fixed it right away, and I sent him copies of the fix so he didn’t wonder if I fixed it. He (O’Connell) was a talented guy, and he wasn’t afraid of anybody. These hatchet men that I worked with – he scared them.” 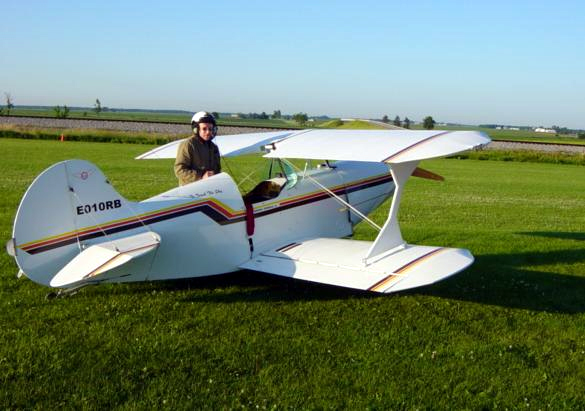 Judge Baner is seen with the Ragwing Special airplane that he built from a kit about 10 years ago. He has since sold it to a person in Montana.  Photo by Jerry McDowell.

John Marshall wasn’t his first attempt at Law School. Baner lived with his parents and sister, Barbara, in Franklin Park, a suburb of Chicago, until third grade, when his parents were divorced. He moved to Eureka, the home of his mother’s parents, graduating from Eureka High School in 1954. Baner attended Eureka College for a year, when he married Janet, whom he had grown up with since fourth grade.

He then switched to Bradley University and went to law school at the University of Illinois, where he flunked out after one year. He was working full time as a radio operator and clerk for state police and as an orderly at a hospital at night.

“Then I was nowhere,” he said with a laugh. “I had no degree. I had three years of college that were useful and basically no credits from law school.” He eventually got his bachelor’s degree from Bradley, again while working full time and having a family. They moved to Chicago in 1960, where he decided to take a slower pace in law school.

“I learned the hard way one time,” Baner said.

In politics, Baner was defeated in his first run for the Constitutional Convention in 1970 and his first attempt to become State’s Attorney, then a part-time position.

At the end of his first term as State’s Attorney, an opening for a judgeship came up with the retirement in 1980 of Samuel G. Harrod, II. Baner was a judge for 16 years, including overseeing two trials for David Hendricks, whose earlier conviction was thrown out by the state Supreme Court and he was acquitted of the ax slayings of his wife and three children in 1983.

“I had had enough of it,” he said. “It was an interesting job but a little of it went a long way.”

Baner was assigned to the Hendricks case because the initial judge damaged his back loading the many boxes of discovery evidence to haul them to Rockford for the trial. The jury decided Hendricks was guilty after 5 ½ hours. The trial lasted 10 weeks. Hendricks asked for sentencing by Baner instead of the jury.

He made the surprise decision of sentencing Hendricks to four consecutive life sentences, without hope of parole, instead of death.

Baner was quoted at the time: “I cannot in good conscience apply the sanction of death unless I have been convinced of his guilt beyond a reasonable doubt,” Baner said. The judge said that he believed that Hendricks probably had murdered his family, but noted “mere belief is not enough.”

“One thing people don’t understand is that the judge knows a lot more about a case than the jury knows. I get to watch him as he’s combing his hair and primping himself before he goes into the courtroom. I get to watch all that stuff. You have to ignore all that. That’s hard to do. You have to cease being a person. You have to look at the evidence, and I just decided that the evidence wasn’t enough to sway me, therefore I wasn’t going to give him the death penalty.”

The Appellate Court and Illinois Supreme Court affirmed the convictions, but later, the Illinois Supreme Court, with different members on the court, sent the case back for re-trial, ruling prosecutors improperly introduced evidence about his affairs with women who modeled his back braces.

Prosecutors were left to argue that food in the victims’ stomachs hadn’t digested enough before Hendricks left on his business trip.

“The jury in that second case really didn’t have a lot to go on,” Baner said. “The food stuff. That was pretty much it.”

Judge Baner also made headlines in the mid 1990’s when he sentenced an El Paso woman to prison for getting pregnant. Susie Ferrell, 23, of El Paso, had pleaded guilty in February 1994 to charges of trying to suffocate her 3-month-old son in December 1993. Judge Baner sentenced her to three months in prison and four years’ probation. As a term of probation, he ordered her not to “engage in any activity which has the reasonable potential of causing her to become” pregnant.

The case got the attention of the ACLU and national media.

“I did something that probably I knew was going to go downhill,” Baner said. “I was hoping that the Fourth District Appellate Court would be willing to change their position on something and they weren’t. That was a real close one, and it became a Constitutional question because it was a Right to Privacy issue. I mean I had no trouble thinking that was the right thing to do.”

“That lady should never had children; she never should have had more children, but the Right to Privacy is a pretty strong right.”

The Illinois Supreme Court declined to hear the case, leaving intact an appeals court ruling that the order was illegal.

In the 1990s, the judge as a private citizen began going to flood or tornado disasters to help with rescue efforts. His first was to Katrina with members of Crosspoint Community Church. Janet tagged along on the first couple trips, but now he goes alone.

Baner has a skid loader on a trailer that he pulls with a motor home. It can pick up piles of debris or knock down walls. He said he usually works with church groups, most recently with Samaritan Purse.

His 12 trips have included the South Jersey Shore, Joplin, Mo., and most recently, Moore, Okla.

“The reason I do this stuff out here is that I just think that life has been really good to me and I owe something,” Baner said. ‘I owe a lot more than I could ever pay back. I’ve had to work, but life has really treated me right, and a lot of that has to do with my wife. Life would have been a lot different.

“She gets credit for children that turned out OK, and they all still come here at Christmas.”

Baner continued his flying hobby at The Heart of Illinois Ultralights Club of Deer Creek. He used to fly and build airplanes and is now restoring an antique ultra-light in one of his three barns. He plans to sell it when finished.

“I quit flying a couple years ago,” he said. “I had a couple accidents and decided I had used up my luck.”

His barn also stores a 19-foot wooden Carver boat that he restored. He recently went on an 800-mile trip in the boat with friend Gary Weiss of Eureka.

Pet Peeves: “People when you’re driving the speed limit, particularly in a construction zone, who want to go around you all the time.”