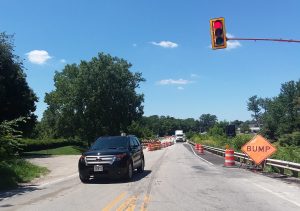 If April, May and June rain brought flowers and floods, then it seems July sunshine and heat brings construction zones.

No, that doesn’t rhyme and most people like May flowers better than road cones
According to the Illinois Department of Transportation, anyone traveling east and west on Illinois Route 24 through Eureka should expect delays.
The bridge over Walnut Creek, less than a mile west of Illinois Route 117, is reduced to one lane this summer.
Bridge traffic is primarily directed by a set of solar powered traffic lights, and the open land has a maximum width of 10 feet. The Illinois Department of Transportation expects work to be finished by, or before, October.
IDOT currently has 11 total projects in Woodford County. Five projects are on Interstate 74 at a state rest stop near Congerville. The remainder of work is being performed in El Paso, on Routes 24 and 39.
Tagged with: Eureka Illinois Department of Transportation Illinois Route 24 Road construction Woodford Woodford Chronicle woodfordchronicle.com