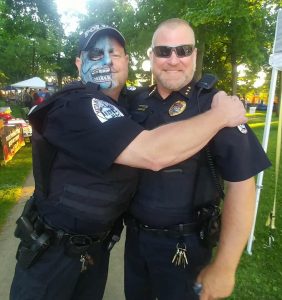 When Bradley Rebman (right) came on board as Metamora’s police chief in January 2019, he wanted to build a stronger bond between the police and the community. Since then, he’s built an active Facebook page and he and officers have participated in school and community events. (Photo courtesy of Metamora Police Department)

This may not be the express reason why former police chief Mike Todd was placed on administrative leave in December 2018, but current chief Bradley Rebman acknowledged the village “had a reputation for issuing a lot of tickets, and stopping a lot of cars for such a small community had it had a negative impact,” Rebman said. “It takes away from community policing. That was my goal, to take us back into the community and begin community policing.”

Rebman was hired on Jan. 18, 2019 to replace Todd, and when he says, “community policing”, he simply means that he and his department become a part of the community, not apart from it.

When Todd was placed on leave, Metamora Village President Ken Maurer told the Chronicle, “We’ve lost faith in his ability to lead.” A month later, Rebman was chosen by the Village Board from more than 20 applicants.

“When I first started, it was a little rocky. The guys didn’t know me that well. I didn’t know them that well, and there was residual stuff going on from my predecessor,” Rebman said. “We gained each other’s trust — it didn’t take long —  and the community treated me well when they found out I’m not a guy who wants my officers out there writing ticket after ticket.”

He said he would rather have them circulating at Old Settler’s Days — getting their faces painted — or at high school and grade school functions, and other events that allow the police to mingle with the community and foster trust.

“My goal was to get the community to trust in us and believe in us again,” Rebman said, “and help them in every area, whether it be going to the high school and the grade school and being a part of those activities, or just show up at events and be a part of the crowd. People really like that.”

Previously, Rebman worked for the Woodford County Sheriff’s Department. During the 22 years he was there, he served as a patrol sergeant and detective, and brought those skills to lead as chief of police. 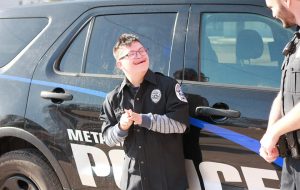 When Metamora Police Chief Bradley Rebman heard that Ben Garza was set to graduate from high school in 2019, he sent officers to the school who presented Garaz with a police uniform, then gave him a ride in a squad car. “He’s a big fan of our department and we wanted to do something special for him,” Rebman said. (Photo courtesy of
Metamora Police Department)

“When I was at Woodford, I gained a lot of experience in police work, in general. Then, I was promoted to patrol sergeant and was pretty much in charge of the whole division, which gave me leadership skills,” Rebman explained. “As a detective, the experience as a whole gave me a whole wealth of experience that I didn’t have as a patrolman or sergeant.”

Rebman doesn’t care to have his police work take center stage. He’d said he would rather promote teamwork within the department and community involvement outside of that, which also includes maintaining the police department’s active Facebook page.

“Creating a Facebook page to promote our department, it shows what we’re doing out there, lets people see what we’re doing,” Rebman said. “For the most part, the community has seen the difference, and we get nothing but compliments. So, I’m thinking we’re doing something right.”

Rebman frequents the Facebook page almost daily and interacts with the community through posts and messages. Their page may be found by searching Metamora Police Department.