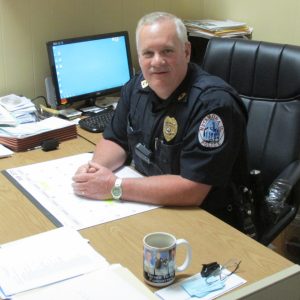 For the second time in recent weeks, Metamora Police Sgt. Tim Ford and his K-9, Oz, are in the spotlight.

“We’ve lost faith in his ability to lead,” Maurer said. “At this point, I don’t want to say anything. Right now, he’s being paid. I’ve appointed Tim Ford as an acting chief.”

At the Oct. 16 village board meeting, Maurer suggested the board consider the cost of maintaining the department’s K9 unit, which includes Sgt. Ford. A rumor quickly arose that Ford and Oz would be retired.

“I wanted to evaluate the whole program and see how we’re doing,” Maurer said in November. “Our dog has about three to five years until he ages, and we may not continue with a K-9 unit after that.”

Oz may well face an early retirement, however, if the board sees fit to promote Todd to police chief.

“There’s a lot of training to keep the dog certified, and Officer Ford has to go to every training session. There are vet bills, and other costs, too,” Maurer said. “It takes Ford away from making regular stops. Our policy is that Officer Ford should be a dedicated K-9 handler, and we can’t have a drug dog walking around a car during a routine stop.”

Maurer has said that Oz would remain with Ford after retirement, a common policy for most police departments; K-9s are typically retired with their handlers. If Ford is named chief, and if he will pull double-duty as the K-9 unit officer is up to the board.

The specific reasons for placing Todd on administrative leave, and for his potential replacement, may not be made known. According to the Illinois Open Meetings Act, personnel matters can be taken into closed session for discussion before resuming an open session and voting.

Rumors now abound on Facebook as to why Todd was placed on leave, but those claims are so far unfounded.

Many have spoken out to thank Todd for his service and show support. Todd has been with the Metamora Police Department for 15 years, and has served as chief for nearly half of that time. Before that, he worked as a correctional officer for the Tazewell County Sheriff’s Department.

“I have had the pleasure of not only working with Chief Todd, but also the privilege to call him a friend. Chief Todd was the visionary and played an integral role in getting a school resource officer in all three schools in Metamora,” resident Wendy Bernier-Vogel wrote in a Dec. 13 Facebook post. “Thank you, Mike for 15 years of hard work, dedication and for caring so much about the youth in the Metamora community.”

Todd could not be reached for comment. The village board was scheduled to meet on Tuesday, Dec. 18 at 7 p.m.