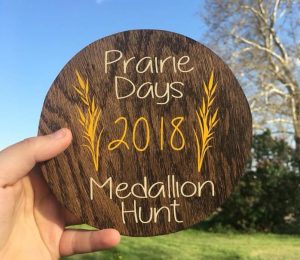 Now called “Roanoke Prairie Days”, the one-day festival will be held at Roanoke Park on May 26

The names and faces may change, but the celebration will continue for Roanoke residents who look forward to the town’s annual Jumbo Days Festival.

Now called “Roanoke Prairie Days”, the one-day festival will be held at Roanoke Park on May 26, and Roanoke Events Committee chairperson Jessica Iorger said the festival is free, and packed with family-friendly events.

“We heard back from a lot of people who felt that Jumbo Days was a little expensive, so this year, everything will be free, but people can make donations if they wish,” Iorger said. “We’ve re-branded and changed names and we’re really looking forward to the festival, though we would love for more volunteers to join us.”

Iorger and committee members Kayla Shute, Kate Davis and Brian Green joined the Roanoke Events Committee last year and will manage the village’s holiday activities, including Independence Day, Halloween and Christmas Celebrations. Iorger said the Joe Stamm Band and a car show are among the attractions planned for July 3.

There will be no carnival at Festival Days. Instead, the park will be populated with bouncy houses and activities, including an obstacle course, a children’s ride-on train, a pie-eating contest sponsored by Caleri’s Bakery and a talent show. Merilee Studios will perform in the afternoon, and later in the evening, The Band Rio Grande will perform until 8:30 p.m.

“We’ll have the Wild Style doing face painting, the Unique Twist will be there with free balloon animals,” Iorger said. “There’s a parade at noon, a kiddie tractor pull and the Roanoke-Benson volleyball team will be selling pork chops.”

Other vendors will be at the festival with food and fare, and winners of the Roanoke Medallion Hunt and the Cutest Baby Contest will be announced that day. Entries are still being accepted for the pie-eating contest.

“We really want to breathe new life into the annual festival by making it a super family-friendly event that everyone can afford,” Iorger said.

For more information on Roanoke Prairie Days and other Roanoke events, visit the Roanoke Events Committee Facebook page at www.facebook.com/RoanokeEventsCommittee/.