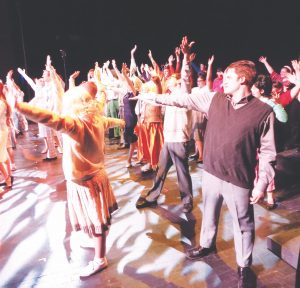 : Since it began in 2004, the Penguin Project has, locally, produced 14 different Broadway-based plays, boasts 33 chapters in 28 states and has garnered national awards for its work with special needs youths. The organization does not discriminate against any disability, and welcomes participants ages 10-22. (Photo by Holly Eaton/for Chronicle Media)

There are two things Dr. Andrew Morgan is passionate about — theater and people with special needs.

So, 15 years ago, he and his wife Kathy combined the two and founded the Penguin Project, an award-winning national program with 31 chapters in 28 states.

“My husband had been treating children with special needs his entire career,” Kathy said. “We’d been active in community theater for 30 years, so we combined the two to give kids with disabilities the chance to do what typical children get to do.”

On Jan.  30, the curtain fell at the East Peoria at Eastlight Theatre on the Penguin Project’s final performance of “Hairspray, Jr.”, an abbreviated version of the Broadway musical.

“The theater seats 1,100 and there wasn’t a seat in the house available,” Kathy said of the sold-out performance, “and it’s not just family and friends, it’s our loyal supporters who come every year to see these amazing kids. I can’t shout out my praises for the community any louder or harder to say, ‘Bravo!’ to them.”

It all began at Eastlight Theatre in 2004, she said, when the curtain rose on “Annie, Jr.”, the Penguin Project’s inaugural performance. The performers on stage astonished the crew, their families, and the Morgans.

As it states on the group’s website, the program “provides a supportive environment for children with disabilities to explore their creative talents.  It has also demonstrated that participation in the performing arts has therapeutic value by enhancing social interaction, communication skills, self-confidence and self-esteem.”

And the namesake?  Just like the birds in the wild, “our penguins may not be able to fly, but that does not prevent their spirits from soaring,” the founders state. 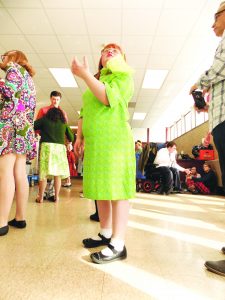 “I don’t think any of us knew at the time what the emotional outcome would be for us, for families, for friends,” Kathy said. “It’s far more than putting on a production. Our artists’ disabilities really disappear. We didn’t foresee that in the beginning.”

Not only did the artists shine in the spotlight, they also developed strong bonds among themselves, and their families also formed new relationships of the like many of them had not experienced.

Kathy said the mother of an Autistic artist wept over a phone call her child received from another teenage artist. The woman’s child had never been invited by anyone to do something fun.

“It’s a support group for parents, as well,” Kathy explained. “We didn’t realize how isolated some of these families are. I don’t think we anticipated that. We also didn’t anticipate the incredible support we would get from the community.”

Within four years, a second Penguin Project opened in Bloomington and the domino effect followed. 29 chapters emerged in the decade that followed, and, just after the close of “Hairspray, Jr.”, Kathy was headed first to Alabama, then to Florida to assist with two new chapters.

“We set up guidelines, and we go and we train them through their first production,” she said. “We make six-to-seven visits to train them. It’s a very comprehensive program.”

Foremost, the program requires that a main consultant have extensive experience in theatrical programming for children with disabilities. Also, each artist is shadowed by a volunteer mentor who helps with whatever they may need and gives the actor the “star treatment.”

“Dr. Andy”, as Kathy’s husband is lovingly called by the artists, is a graduate of Johns Hopkins University School of Medicine who specializes in pediatrics and neurodevelopmental disabilities.

Andrew Morgan carefully crafted the Penguin Project’s guidelines to meet the needs of all manner of special needs artists. There are none who are excluded. The only requirement an artist must meet is age; actors must be at least 10 to join, and they age out at 22. 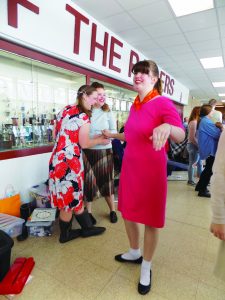 When Penguin Players first began, the age requirement was younger, and Taylor Graves was 8 when she joined. She graduated this year, having acted with the Penguins for 14 years.

Her final role was as Edna Turnblad, a central character to “Hairspray.” She also has acted in “Music Man”, “Guys and Dolls”, “Grease” and all other Penguin productions except for “Annie”.

As it has grown, the Penguin Project has been lauded with ovations. In 2005, it garnered an Award of Excellence from Music Theatre International. It also earned the National Easter Seals Foundation’s Lou Lowenkron Award for Innovative Programming in 2007.

The project’s dossier cites numerous other awards and achievements, and of them, perhaps the most distinguished may be the 2017 Youth Program Award from the National Arts and Humanities.

“The project was founded on the principle that children with special needs can participate and excel at community activities when given the opportunity and support,” Andrew said while accepting the award in Washington D.C. that year. “We have seen young people who had no friends, would hide when they met people, and feared interaction with others blossom into engaged and confident individuals who proudly show their talents.”

Indeed, they do. Before the final “Hairspray, Jr.” performance at Eastlight Theatre, a dapper Daniel Van Buskirk, “Mr. Pinky”, strutted about in a suit as girls in bouffant wigs posed for photos and helped each other with makeup.

As he waited for the play to start, wheelchair-bound artist Chase Lowe enjoyed warm, loving embraces from Priscilla Jackson and McKenzie Corbels. 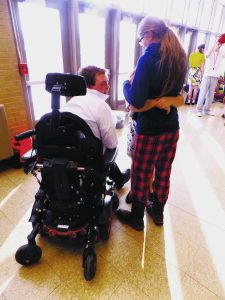 “We went to Limestone with Chase, and we came to show him support and see him in the play,” Corbels said.

Some, like Lowe, speak very little, if at all, but the joy the eyes of those artists speaks volumes and the smiles rarely fade from their faces. During another production, Kathy said, a non-verbal artist broke his silence and began singing and dancing.

“Other than raising our own children, this is the most fulfilling thing we have ever done,” Kathy said. “The special bonds that grow with our artists and mentors, the loving support of the community. It can be very difficult to put into the right words just how amazing all of this has become.”

HOW TO GET INVOLVED

For more information on the Penguin Project, including volunteer and acting opportunities, visit www.penguinproject.org. Opportunities abound all year and casting and rehearsals for each annual performance begin each year in September.