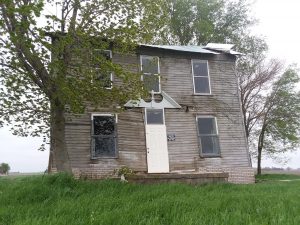 When Warren Danz was instructed by the Tazewell County officials to improve his dilapidated Eureka Road farmhouse, the Peoria attorney sent a handyman to meet their demands. Windows were tacked to the outside of the house, as were the doors and the roof was repaired with corrugated metal sheets, sections of which have since blown into neighboring fields. Danz also had a fancy white pediment placed above the front door. (Photo by Holly Eaton/for Chronicle Media)

Warren Danz would like to save his family home, but if he doesn’t bring it up to snuff, the old farmhouse will have to come down — if the wind doesn’t blow it over first.

No one is sure when the house was built, and it has no mailing address, other than “Eureka Road, Washington”. It sits, slightly sideways, in a small grove of trees near Dieble Road, a few miles away from the Tazewell-Woodford counties seam.

“I was born in the house. My parents, it was their first house, it was maintained when they came from Switzerland immigrated from there,” said Danz, a Peoria attorney. “Our whole family was raised there, and another member of the family lived there, then I bought the house 30-40 years ago. It’s a historic farm.”

Danz’s  father Alex was born in Switzerland in 1899. His mother Anna was born in 1899. They moved to Washington just before their first son, Arnold, was born in 1932. Sister Hilda arrived in 1936, just after Christmas. Warren was born in 1942.

The image of young Swiss immigrants making a life in a rural farmhouse is romantic. But long gone are the pitter-patter of the Danz children’s footsteps, and all that remains of the home is the ghost of what it once was.

All but Warren have passed away; Alex died in 1972, Anna followed nine years later. Arnold, a bachelor farmer, died in 2002, and educator Hilda Danz Campen passed on in 2007. Tazewell County Community Development Administrator Kristal Bachman, understands the emotional value it holds for Danz, and said the zoning board has tried to be patient. 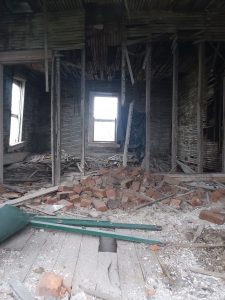 Because of overall deterioration, the Danz house on Eureka Road is considered beyond repair. “We told him these repairs just weren’t going to work, and we’ve really tried to work with Warren,” Tazewell County Community Development Administrator Kristal Bachman said, suggesting that the house could be used for fire department training. “Maybe he could work with the fire department on something, rather than just tear it down.” (Photo by Holly Eaton /for Chronicle Media)

“He grew up there, and the family rented it, that’s the sentimental value,” Bachman said. “At first, our goal was to have it removed, and we took it before our adjudication officer and we made a compromise. We reached an agreement that he would put windows and doors and a roof on the house.”

Shortly after, Danz hired a handyman to complete the tasks. A roof was loosely fashioned with sheets of corrugated metal. Simple double-hung windows were pinned to the outside of the house with nails. Doors with locking knobs were placed on the front and side of the house. The work was punctuated with a fancy white pediment above the front door that stands out like a bride at a carnival.

Bachman, the zoning board and the neighbors were not impressed. Vandals continue to trespass there, and have spray painted graffiti on the house. Sections of the metal roof have wafted away with recent winds and are littering the neighboring fields.

“We fixed it all up. It’s not livable, bit looks nice. It looks like a historic house,” Danz said, comparing its ascetic beauty to a nearby satellite tower. “There’s a tower across from the house. I hate those things. If you compare them to the house, I think the house has more appeal than that.”

Danz said he’d like to put a covered wagon in the front yard to give the house more of a historic appeal. Bachman thinks it might be better off if it were set on fire.

“We told him these repairs just weren’t going to work, and we’ve really tried to work with Warren. It’s gotten to the point where it just has to be removed,” Bachman said, suggesting that the house could be used for fire department training. “Maybe he could work with the fire department on something, rather than just tear it down.”

That is, if firefighters can make it safely through the house, whether it’s in flames or not. Most of the floors have collapsed into the cellar and the stairs leading to the second floor are destroyed. There will be another hearing soon between Danz and the zoning board, and it’s likely the old farmhouse’s fate will be ruled on then. If it stands that long.