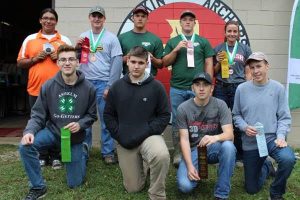 Archery is a sport where the competition is against you and a target, except when your brother is competing right next to you. Then, it becomes a sibling rivalry.

The brothers, 14 and 16 respectively, finished first and second in recurve bow competition, 270 points ahead of the nearest competitor. As the lead went back and forth, the main question was who would claim the championship.

The competitors started the day in the wooded area around the Pekin Archers complex where they shot both three-dimensional targets and flat field targets. The Sniders shot dead even on the 3D course. In field shooting, Ben held a two-point lead going into the lunch break.

In the afternoon, participants shoot at large, round targets from distances of 50, 40, and 30 yards.

At this point in the competition, participants start to feel fatigue from repetitive shooting. By the end of the day, each competitor will make 105 shots.

Ben gained a 60-point advantage over Isaac in the round target competition and was awarded the championship buckle in the recurve division.

The atmosphere was relaxed and supportive, with families pitching popup tents and relaxing in chairs awaiting reports back from their teens.

“4-H is meant to come from the people,” said Curt Sinclair, interim University of Illinois Extension shooting sports coordinator, “and this is exactly what these families wanted to be doing with their kids today.”

A team of certified state 4-H shooting sports volunteers organized the event, but youth scored their achievements as a shooting cohort after each end of arrows as a shooting cohort. Though a competition, that didn’t stop the teens from encouraging and helping their shooting partners, Sinclair said.

Though rain pounded the area the day before the contest, the skies cleared for the event. An avid sportsman, Kutter Thompson said he chose competing that day for a chance to make the national Illinois 4-H archery team over scouting a 15-point buck.

The 16-year-old placed third, just 16 points back from the winner in the compound division. A skilled baseball pitcher, the teen divides his time between baseball, hunting, and fishing.

For some youth, archery is their only 4-H experience. Others, such as Madi Hofreiter of Mason County, participate in a variety of 4-H programs. “4-H opens up new experiences to me which some people don’t have access to.”

She serves as vice president of the Happy Handful 4-H Club.

Brianna Hayes of Peoria County studies photography, cooking, and visual art projects, but said archery allows her to compete in a sport.

For more information on this program or joining 4-H, contact the Woodford County Extension Office today at 309-467-3789 or visit us online at go.illinois.edu/LMW.