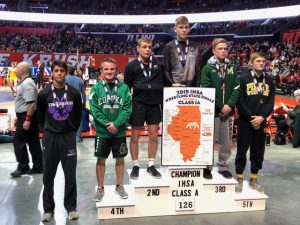 Asher Wiegand stands on the podium after finished fourth in Class 1A State Tournament at 126 pounds. (Photo by Donald Pyles/for Chronicle Media)

Twenty-five years ago, Matt Wiegand took fourth place in the IHSA individual state wrestling tournament. On Feb. 16, his oldest son, Asher, did so, too.

For a fourth year in a row, Eureka High School senior Asher Wiegand wrestled at the state level, setting two records for the high school. Wiegand was the first EHS freshman to compete in the IHSA state tournament and the first four-time state qualifier.

“Under the circumstances, I’m really happy with how it went,” the 126-pounder said of the tournament. “I jammed my thumb, I didn’t get it looked at, and when I got it checked out they said I’d need surgery, but to just finish out my senior season, so I’m thankful for finishing in the top four.”

“The record doesn’t matter. My whole goal through high school was to see how I can grow in each area,” he said, “although, wrestling has always brought a lot of joy to me especially in the winter season.”

By “each area”, he means academics, athletics and civics. Throughout high school, Wiegand has served on the student council, has been a member of the National Honor Society and played football for the Hornets. In 2018, he was named Second Team All-Conference Lineman, despite being small for a defensive player.

His football career earned him the school’s Dean Zimmerman Player Scholarship, and high school staff nominated him for the IHSA All-State Academic Team.

Nominees are expected to maintain a senior-year 3.5 grade point average, must have participated for at least two years in an IHSA-sponsored sports or activities and must be considered outstanding citizens.

Nominees for the Academic Team are evaluated by IHSA principals and members of the Illinois Activities Directors and Athletic Directors associations.

Winners will be honored at a banquet this spring. And, while he proved himself on the field and the mat, Wiegand’s social ventures mark him as an outstanding citizen.

As well as being an active member of Crosspoint Community Church, he also leads the Fellowship of Christian Athletes, a 7-12 grade school group that meets weekly to show support for each other and pray together. 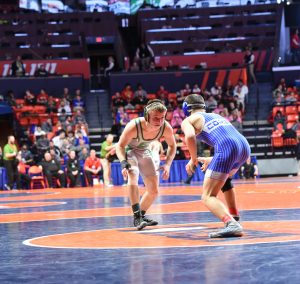 “We meet once a week on Thursday mornings. It’s a great atmosphere for believers to be encouraged for the week,” he explained. “We bring in food and we fellowship together as students and pray over each other. I’m thankful to be a part of that through high school and middle school too.”

His brother Gabe, 16, wrestles at 120 and also goes to the FCA meetings. The youngest Wiegand, Tanner, also wrestles and will start going to the FCA next year when he’s in seventh grade.

“My father and my uncle (Luke) were great wrestlers. It’s in the family, and it’s always been a joy to our family,” Wiegand said. “My dad and I wrestle around together. He’s a huge supporter, and Uncle Luke is always encouraging me, and he wrestles with us when he can.”

Even though it’s technically a team sport, wrestling pivots on the individual and that’s something Wiegand said reverberates with him.

“I’ve always been a do-it-myself person, it makes me feel good because when you accomplish something it’s on you,” he said. “You’re the one you have to rely on, and I enjoy the independence you have and being unique and being you on the mat.”

As far as college scholarship offers are concerned, Wiegand is mum on the subject, and simply said he’s considering “a few offers.” He did say, however, that he plans to study biochemistry and that he’s considering becoming a dentist.