“All truths”, in this case, referencing the glut of misleading or false information trucked about as fact by partisan media bloggers and outlets, social networks, the so-called “dark web” of conspiracy sites and of profit-seeking charlatans.

According to moderator Kelly Fisher, Melick Library Public Services library, “Fake news, or hoax news, refers to false information or propaganda published under the guise of being authentic news. Fake news websites and channels push their fake news content in an intentional attempt to mislead readers of the content and spread misinformation via social media and word-of-mouth.”

Thurwnager pointed to cognitive dissonance, the theory that conflicts of interest and belief systems create personal bias, as a factor in the fake news dilemma. As C.S. Lewis wrote, “What you see and hear depends greatly on where you are standing; it also depends on what sort of person you are.”

“People are not interested in the other side of the story,” Thurwanger, a retired Navy Commander and former U.S. Navy Public Affairs Officer. “We tune into the network that please us. The media gives us exactly what we want.” 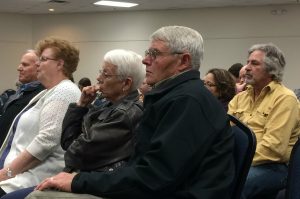 “Fake news has always been present, but now it’s become an industry in and of itself,”  Eureka College Professor of History Dr. Junius Rodriguez told the group of around 50 people who gathered in the Terrell Room at the college March 27. (Photo by Holly Eitenmiller / for Chronicle Media)

According to a chart published on Melick Library’s “Guide to Fake News” site, the majority of mainstream media, such as Fox News, CNN and the Huffington Post, is viewed as having “questionable journalistic values” and focus on confirming biases.

National Public Radio, Reuters and the Public Broadcasting Service are cited as having minimal bias, while Addicting Info and Infowars, lean hard left or right and rely mostly on conspiracy theories.

“We have little control over what people see and believe,” Glass said. “It comes down to how you were raised, your values and partisanship. Even when presented with the right facts, people may not come to the same conclusion.”

Kaergard, also a Communications Adjunct Instructor at Bradley University, said he considers PBS’ Newshour a fairly non-partisan program, and noted that the show’s ratings have increased, which may indicate a trend in viewership toward honest media.

In central Illinois, media outlets tend to be less competitive and more inclined to accuracy in the news, rather than being first to file a story.

“There’s not the pressure getting (news) up on the page,” Kaergard said. “We post when we are ready to post.”

Be wary, he said, of making assumptions based on loose reports and even police scanner broadcasts, where fragmented information may be falsely interpreted.

“There’s a need to engage with readers if they’re being taken in by a story,” Kaergard said, “encourage critical thinking, there are no ‘black or white hats.'” 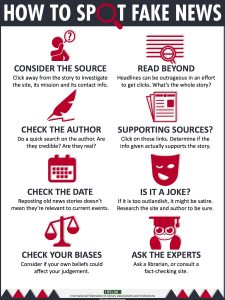 “People stopped vaccinating for MMR and it has led to deaths of children and a hundredfold outbreak in measles,” Hennessy said. “Wakefield lost his license and it turned out he was developing his own vaccine.”

Despite the Lancet’s complete retraction of the study, and widespread public criticism from the medical community, she said there are still those who believe there’s “wiggle room for doubt” and refuse to vaccinate their children.

Wakefield now publishes a website, “Age of Autism” in which he accepts donations and continues to refer to himself as a doctor. But Wakefield’s site is nothing out of the ordinary on the Internet, the “Wild, Wild West”, as Thurwanger calls it, where splashy websites, keen graphics and deceptive headlines are handily broadcast with free or cheap publishing programs.

Fisher pointed out, “clickbaiting” people with headlines and fake news is a money-maker. “Clickbaiting” refers to any material which leads the viewer to share and forward that information to others.

Just before the 2016 presidential election, the Denver Guardian published “FBI Agent Suspected In Hillary Email Leaks Found Dead In Apparent Murder-Suicide.”  Within 10 days, the story gleaned more than 1.5 million page hits, and was shared on Facebook around 500,000 times.

In fact, the story was fake, the Denver Guardian does not exist, and its creator, Jestin Coler, founder of Disinfomedia, makes a considerable income duping the public with ridiculous headlines and misleading articles. Coler also continues to publish fake news under the name “Allen Montgomery”.

“It’s fake news on steroids,” Rodriguez said. “We live in a free society, but there is a social burden of truth, rather than lying for profit.”

Rodriguez recommended Tom Nichols’ book, “The Death of Expertise: The Campaign Against Established Knowledge and Why it Matters,” and Glass referred people to leverage Melick Library’s guide, at libguides.eureka.edu/FakeNews.

There, viewers may access such subjects as, “How to Spot Fake News” and “The Impact of Fake News”, as well as fact-and claim-checking resources.

— What’s real and what’s not: How to identify fake news online —