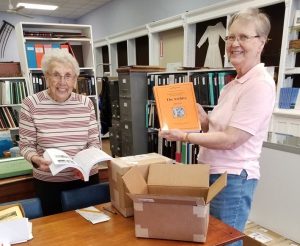 In some fashion, the Woodford County Historical Society’s most recent book, “The Archive”, began writing itself more than 200 years ago, though compiling that history required 12 years of society newsletters.

“The Archive”, a compilation of society newsletters from 2005-17, arrived at the beginning of May. and is currently for sale at Eureka Public Library and the historical society office at 112 N. Main St.

The term “newsletter” may suggest the idea of society news and events, but current president Karen Fyke said focus of the quarterly publications was primarily on Woodford County history and genealogy.

“I wrote all of the newsletters during that time. They’re particularly good for people who are interested in history,” Fyke said. “I took old newspapers and transcribed those articles. There’s one article after another, like, ‘Mr. Jones is visiting in Peoria’ and ‘Mrs. Adams had visitors in Sterling.’ “

The journal of Solomon Gingrich is included in its entirety in a series of newsletters. Gingrich, a lifelong Woodford County resident, lived from 1892 until 1983 and told of his life in great detail to a friend, who transcribed it.

“A friend of his, in the 1960s, typed his story of how he grew up in Metamora as a boy on a farm,” she said. “It told about his first day of school, what he took for lunch, how they did things like haying and making butter.”

The trove of information also includes data from the 1843 land records, which illustrate how Woodford County was primarily founded by War of 1812 veterans, who were gifted the land. John Darst, 1816-95, is considered, by some, to be the Father of Eureka College, and is among the featured veterans. 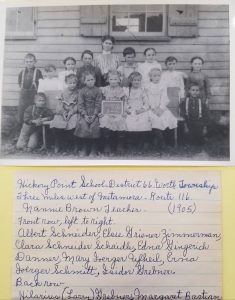 Fyke currently is working on another book on all the one-room schoolhouses of Woodford county, which she expects will be published in 2020.

“There were about 100 one-room schoolhouses, and I’m working through all of them one-by-one,” Fyke said. “We love photos and there’s quite a collection of school photos put together already. There also were little books published starting in 1906 through the 1950s that included all of the names of teachers, school information and so on.”

The books included district news, such as a new ventilation system that was installed in Cram School just after the turn of the century. Fyke also has accumulated stories first-hand from residents who recall the early schools.

Along with the school histories, she also is acquiring veteran’s stories for another publication. Anyone who would like to share anecdotes, accounts and photos can contact her by email at kdfyke@mchsi.com, or by phone at 309-360-6772.

“The Archive” is 412 pages, with each quarterly being around eight pages each. The book may be purchased from the library or the society offices for $40. Books may be mailed for an additional fee of $7.50.

The historical society has closed its website but maintains an active Facebook page, where ongoing society news and events may be found, along with opportunities to purchase any of their numerous publications.

Members also receive the quarterly newsletter. The group’s Facebook page may be found at www.facebook.com/WoodfordCountyHistory/.