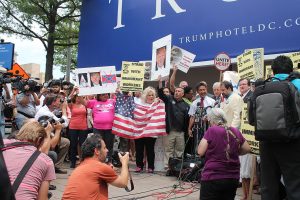 A protest against Trump in Washington, D.C. (Photo by Elvert Barnes / Wikimedia Images)

Any chance that the “never Trump” crowd had to foil the presumptive Republican presidential nominee’s plans has come and gone, but not without some controversy.

Illinois state Rep. John Cabello (R-Loves Park) is an at-large delegate for the GOP. He says the woman behind the anti-Donald Trump efforts, Colorado delegate Kendal Unruh, did everything she could to undo the momentum of the New York billionaire. He said that included giving out delegates’ personal information to pressure them into changing their minds on Trump.

In the end, Cabello said the opposition fizzled.

“The controversy that everyone was talking about fell on deaf ears because there was so few,” he said. “She was trying to build up all of this momentum to try to show everybody that they were going to try to not have this happen and she could only muster 12 votes.”

Trump is set to be officially nominated as the Republican Party presidential candidate on the first ballot Monday in Cleveland.

Cabello said the committee met for a marathon 15 hours Thursday. Committee members voted down proposals put forth by Unruh that would have allowed delegates to ignore the results of the states’ primaries and “vote their conscience.”

Trump won the Illinois Republican primary with 38 percent of the vote. Illinois has 69 delegates.

Illinois Gov. Bruce Rauner, U.S. Sen. Mark Kirk and a few other congressmen from Illinois said they won’t attend the convention, which begins today in Cleveland and ends Thursday.

WBEZ Chicago reports that some Illinois delegates will not attend the convention in protest of some high-profile Illinois Republicans not attending.