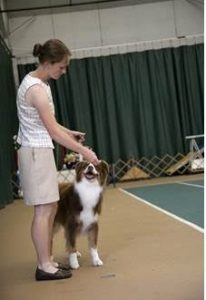 Danielle Stuber of Tremont was one of 160 participants in the 2017 Illinois State 4-H Dog Show held Aug. 26-27 in Urbana. Danielle claimed the beginner high point award with a score of 197.5 in the beginner novice 2 division. Danielle also earned third in the senior showmanship division. (Photo courtesy of Illinois 4-H)

Danielle Stuber of Tremont placed first in the beginner novice 2 division. Stuber claimed the beginner high point award with a score of 197.5.

Other participants from Tazewell County included Elyana Leitner of Pekin in the junior showmanship division.

To get to this level of competition, 4-H members devote months of training, said Dan Jennings, University of Illinois Extension animal science educator. “Not only do the dogs have to perform the required tasks, but they must do so in a new environment surrounded by new noises and distractions, including several other dogs in the same arena,” Jennings said.

Frances O’Donnel of Champaign County received the Deborah Orr Memorial Award for scoring the highest number of points (192.5) in the novice class. The cash award honors the late Deborah Orr who was active in the Kane County dog obedience program. 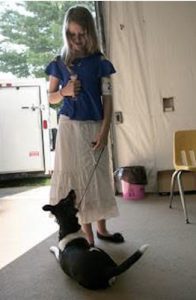 Elyana Leitner of Pekin was one of 160 participants in the 2017 Illinois State 4-H Dog Show held Aug. 26-27 in Urbana. Elyana participated in the junior showmanship division. (Photo courtesy of Illinois 4-H)

Jenna Zeidler and Mary Davis served as superintendents of the show, and members of the Dog Training Club served in various volunteer roles throughout the event.