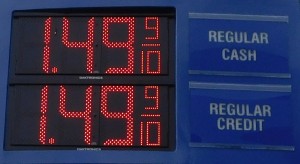 People are seeing more money in their pockets thanks to falling gas prices, which is helping motorists save money at the gas pump.

Cody Cielenski, owner of Doughballs Pizza Palace in Aurora, is thinking about getting a truck.

Cielenski makes the daily commute from his Downers Grove home to his Aurora business thinking about the restaurant’s new offerings, not fuel costs, these days.

“I am definitely saving a lot on gas,” Cielenski said. “As a small-business owner, the gas prices have been fantastic.”

Israel Briones, a delivery driver for Cielenski, is seeing more money in his pocket as well thanks to the continued fall in gas prices.

“It is better for me,” Briones said.

Not getting gas mileage for his deliveries — common in the food industry — Briones can make as many as 30 trips to drop off pizzas on a Friday or Saturday night.

“On a full tank, I can go about 220 miles,” Briones said. “I do a lot of stopping with deliveries and there are a lot of lights which can impact gas mileage.”

Gas Buddy, a gas prices monitoring site, listed the Casey’s in LaSalle as the lowest price in the state with its gas at $1.24 per gallon as of Saturday.

Mark Roeder, one of the owners of Thrift Trucking in Bartonville, near Peoria, said that the drop in gas prices is having some impact on his fleet, “but it is having more impact on our employees. They are seeing more money in their pocket.”

Roeder said most of his 50-truck fleet runs on diesel, which has also dropped significantly in price in recent weeks. He said diesel is one of the his company’s primary expenses so there is benefit from lower fuel prices, but added that a sluggish economy is not creating more business for him to take advantage of that cheaper fuel.

“The economy is so flat,” Roeder said. “If the economy was decent, prices would be higher … Caterpillar is slow, Global Mining is slow. That is hard to swallow.”

Roeder said there is a fuel surcharge that his transportation clients pay, but as the cost of diesel lessens so does that surcharge.

He said one way to boost the economy would be to lower capital gains taxes.

“Don’t try to fix the economy by taxing businesses to death,” the Bartonville business owner said. “Raise the capital gains and you take away the ability for businesses to hire people.”

Lower fuel prices are welcomed by moving companies like The Professionals Moving Specialists in Chicago.

“It is helping our overall operating costs,” said Ana Hernandez, moving coordinator for the firm.

She noted that the Illinois Commerce Commission sets fuel charges for moving companies on an annual basis so the savings seen right now in fuel costs are not being passed on to customers.

“We are not able to fluctuate the rate,” Hernandez said of the fuel charge, which is a flat rate based on distance to and from its Chicago facility.

Susan Chen, an associate professor in the economics department at Illinois State University, said that while motorists may be paying less at the pump, they might soon be paying more for those convenience items that they run in to pick up inside the station’s food mart.

“To make up the difference, you may see other goods at the gas station priced differently,” Chen predicted. “They have to make profit out of something.”

Chen said the drop in gas prices in not good news for everyone. She noted that gas stations, oil companies and investors in fuel-related companies are all negatively impacted when gas prices get this low.

The ISU professor said the impact that lower fuel prices have on businesses and prices for consumers depends on the individual company.

“The impact on a gas station is going to be different than the impact on Wal-Mart,” Chen said. “I think for a business in retail that needs to bring products to its store, its prices are going to be lower and that cheaper transportation cost should be reflected in prices to consumers … but it also depends how far something is shipped from its place of origin.”

Chen said it could be interesting to see what happens with delivery charges for online purchases.

“Online retailers may not change,” Chen said. “They may charge the same shipping fee as they did when gas was $4 a gallon. People will have to check the financial reports. Amazon’s profit margin may be bigger because of this.”

— llinois businesses benefit, too, from drop in gas prices —