The Illinois chapter for the national organization representing people age 50 and older is ramping up its efforts in voter education for the 2018 elections, launching a new website, enoughisenough.aarp.org.

Ryan Gruenenfelder heard one common theme as he traveled the state last year for forums with residents 50 years of age and older.

“A lot of them said, ‘I’m gonna leave the state.’ ‘I’m not planning to stay,’” said Illinois AARP’s director of advocacy and outreach. “This was extremely concerning to me as a lifelong resident of the state.”

Gruenenfelder said he has no bona fide proof of just what is causing the departure of residents from the Land of Lincoln, but that at least part of it has to be attributed to actions in the state Capital Building.

He noted that the Illinois chapter for the national organization representing people age 50 and older is ramping up its efforts in voter education for the 2018 elections, launching a new website, enoughisenough.aarp.org, and publishing its first report on voting records for members of the Illinois General Assembly.

In 2017, Illinois AARP launched a campaign, Enough is Enough, mobilizing citizens to put pressure on legislators and Gov. Bruce Rauner to break the fiscal impasse and address the state’s financial goals.

“We will leverage Enough is Enough to hold our elected officials accountable to results,” Gruenenfelder said. “This may be an election year, but that is not an excuse to keep kicking the can down the road and avoid bringing all stakeholders to the table to work on long-term fiscal solutions that work for Illinoisans of all ages. We must continue urging our elected officials to address these issues and not allow this state to remain in disarray.” 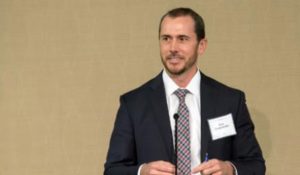 Ryan Gruenenfelder, AARP’s director of advocacy and outreach. (Photo courtesy of the University of Illinois College of Applied Health Sciences)

He said that the state’s senior residents must demand action from the governor, legislative leaders and all legislators in the General Assembly for permanent solutions to restore Illinois’ fiscal health, provide the services that residents, especially vulnerable Illinoisans, need and provide “a bright future for our children and grandchildren.”

As a nonpartisan, nonprofit organization, Illinois AARP’s mission is to educate and inform its members — 1.7 million strong — and other Illinois residents about issues affecting them, Gruenenfelder said.

Gruenenfelder said the legislative report will be published annually.

He viewed the 2017 report “as a key piece in voter engagement and voter education efforts.”

“For 2018, Illinoisans need to know how legislators voted on key issues so that they can make informed decisions come election time,” Gruenenfelder said.

He said the publication is an effort to make sure Illinois residents, especially those 50 years of age and older, have essential information at their disposal in order to make the best decisions for themselves, loved ones and their communities.

“Illinoisans are frustrated with the partisan bickering and gridlock over the last few years,” the Illinois AARP spokesman said. “Millions were hurt by the effects of going two years without a budget. The impact was felt across the state in services that were essential for working families, retired individuals, individuals with disabilities, children and many others. Just because we had a budget for fiscal year 2018 — and even if one passes this year — we are not out of the woods.”

“You see Illinois faces tremendous fiscal and financial challenges in the short-, mid- and long-term and the decisions we will make in the voting booth in November will have an impact on how our state addresses those challenges,” Gruenenfelder said.

He said by mobilizing voters age 50 and older, Illinois AARP wants the governor and General Assembly to feel pressure to do what’s right by the citizens of Illinois.

“We can’t have people continuing to move out of state,” Gruenenfelder said. “We can’t continue not to properly fund schools or properly funding the universities and colleges in this state. We can’t continue on this path that is causing a drain on Illinois when people leave the state. It’s harming the economy. It’s harming the future possibilities for our children and grandchildren.”