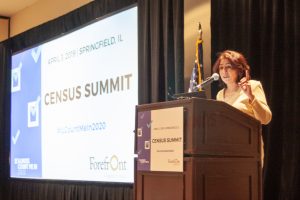 SPRINGFIELD — State Rep. Theresa Mah, a Democrat from Chicago whose district includes most of Chinatown, ties her very presence in the General Assembly to an accurate count of Illinoisans in the U.S. Census.

When the census count came around, community advocates went out to speak to families in the “language in which they were comfortable.” This helped to get an accurate count of the population there, she said.

As a result, more than 90 percent of the area’s Chinese-American population was put into one district when legislative boundaries were redrawn in 2011.

Mah is the first Asian-American legislator in the history of the Illinois General Assembly. She attributes her election to an accurate census count of the population in her district.

“We need to make sure that our populations in Illinois are fairly represented, and that starts with a complete census count,” Mah told a packed audience Wednesday in the Crowne Plaza hotel ballroom in Springfield.

Mah joined a host of other advocates, business leaders, state officials, philanthropists and more at a 2020 census summit hosted by the nonprofit organization Forefront.

Forefront is leading a coalition of more than 40 local and statewide organizations for census outreach.

Wednesday, the group announced the 42 winners of its privately raised $1.7 million grant for census outreach.

The grant recipients have just less than a year to start educating Illinoisans about the next census, which for the first time will take place mostly online.

Dilara Sayeed’s organization, the Illinois Muslim Civic Coalition, received $35,000. She says the money is critical to getting to the state’s more than 500,000 Muslims, telling them how important it is they respond to the census.

“We have zero elected officials in this state,” she said. “Without an accurate count, there will be no redistricting or mapping to improve our representation.”

Deborah Lane attended the event to support some of the groups that her union, Chicago’s Amalgamated Transit Union Local 308, partnered with to seek state dollars for census outreach.

Lane works for the Chicago Transit Authority, which sees more than 3,000 homeless people ride its buses and trains every day.

Some of them, Lane said, are whole families. Some are CTA workers who have lost their homes.

“Forget for a moment about door-to-door canvassing and doing outreach at the homeless shelters,” Lane said. “Nobody is counting the homeless on the trains and the buses they live on day-to-day.

“Who would have thought the transit system was so critical to the census count,” she said, mentioning that federal dollars for the CTA are directly tied to population counts in its coverage area.

She referenced the billions of dollars in federal funding and potential two congressional seats that could be lost with an undercount of Illinois’ population in 2020.

If those seats are lost, Flores said, “our state would cede its presence on the national stage at a critical time when our communities need us to be as strong as possible for them.”

“The governor and our whole administration will be your unwavering partner in fighting for Illinois,” Flores told the crowd.

So far, no action has been taken on various bills in the state Legislature to dole out money for census outreach.

A news conference is expected Thursday on one of those bills, Senate Bill 1408 sponsored by Chicago Democratic Rep. Iris Martinez.

Forefront’s leader on organizing the various census outreach groups said she was pleased with the event’s turnout and the deputy governor’s supportive remarks.

“But we have a lot of work ahead of us,” Anita Banerji, director of Forefront’s Democracy Initiative, said.

Banerji added that among the biggest obstacles to a full count of Illinoisans in the 2020 census are the potential citizenship question, which could scare off many in the immigrant and minority communities from responding, and the online format, which for the first time makes rural Illinois a “hard to count” community, because of low access to broadband internet.