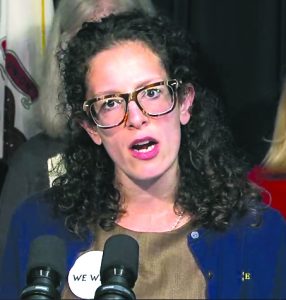 Alexandra Eidenberg, a small-business owner and the founder of We Will, which helps women and children get involved in legislation, says that employers should not be able to ask prospective employees their salary history. “Ultimately, we have to help the workers of Illinois rise,” Eidenberg said. (BlueRoomStream.com)

As a small-business owner, Alexandra Eidenberg says there is only one reason for her ask a job applicant about prior salary.

“(It’s) when I’m trying to negotiate paying someone less,” the owner of The Insurance People in Skokie admitted.

Because of that, Eidenberg, who is also the founder of We Will, an organization of 7,000 members — many of them small-business owners — that helps women and children get involved in legislation, has been active in addressing Illinois’ gender wage gap and the salary-history question.

“We knew as business owners, the reason why you always want to know the prior salary is to negotiate a lower amount,” Eidenberg said.

The We Will founder said that House Bill 4163, which Gov. Bruce Rauner vetoed in September, would have banned employers from asking prospective employees about their salary history.

“What we realized was, through this bill, we could help thousands of people in Illinois have an even playing field,” Eidenberg said at a Sept. 24 news conference calling for a veto override, “and ultimately when you negotiate, and you’re negotiating a new job, it’s really important that everyone is on an even keel. That is what this bill does; and as a woman, I know that statistically women and people of color are paid less so this helps the market that I care most about.”

Eidenberg said when hiring, she always has a budget in mind for the position, whether it is $18 per hour or $50,000 per year.

“I know what I have to work with and what is affordable for my business,” she said. “If I know you are currently making $12 per hour, I also know you are going to be really happy if I give you $16 (per hour), but I had $18 (per hour) to work with.”
She said no business is being pushed into something they can’t afford with the salary history legislation. The bill just gives the prospective employee the same negotiating power as the hiring executive, Eidenberg said.

“Ultimately, we have to help the workers of Illinois rise,” Eidenberg said, “and we do that through bills like this.”

Castro said that the salary-history bill, which she sponsored in the Senate, would ensure wages are based on experience rather than an employee’s pay history.

“It’s a vicious cycle,” Castro said. “If a woman is unfairly paid a lower wage at one job, and that unfair wage can be used to determine her wage at her next job, then she might never be able to earn the wage she is duly deserved.” 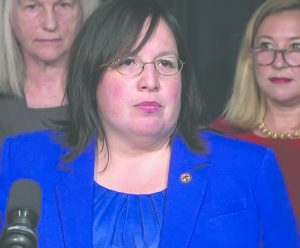 State Sen. Cristina Castro (D-Elgin) said employees should be paid based on their qualifications, not their pay history. (BlueRoomStream.com)

“Working-class families in Illinois are already struggling,” Castro said. “It only makes matters worse when women are denied wages they deserve. All this bill does is help protect working-class women in this state from undue financial hardship so I’m having a hard time understanding why Governor Rauner opposed it.”

The bill would also have given victims of unfair or gender-based wage discrepancies a method to seek compensation, including the recovery of lost wages, punitive damages and reimbursement of legal fees.

“Similar measures have been proposed, but none of them give women the ability to seek justice for unfair practices used against them,” Castro said. “That makes those laws unenforceable. This bill would have been an enforceable law meant to ensure that women in Illinois are paid what they ought to be fairly paid.”

Castro intends to file a motion to override the governor’s veto, during the General Assembly’s fall session.

In his amendatory veto, Rauner said that House Bill 4163 substantially resembled HB 2462, which he vetoed in August 2017.

“Since that time, the gender wage gap has remained,” Rauner said in his veto. “My position has not changed — I am committed to eliminating the gender wage gap and I strongly support wage equality … Massachusetts has already established a best-in-the-country approach to the issue of employers inquiring about salary history. I recommend that Illinois model its legal regime on Massachusetts’ model.

“Unfortunately, legislators again refused to push forward a bipartisan approach that properly balanced the interests of the business community.”

State Rep. Steve Andersson (R-Geneva) said the bill had bipartisan support the two times it came before the state House. He noted that more than 50 percent of the state House Republican Caucus voted for the measure the first time it was presented, and nearly 50 percent of the Republican Caucus voted for it the second time it came before them.

“This is a bipartisan bill,” Andersson said.