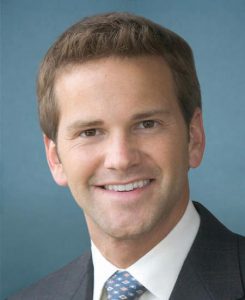 Former Republican Congressman Aaron Schock of Peoria has lost his attempt to get a corruption case against him dismissed.

The three-judge panel of the 7th U.S. Circuit Court of Appeals in Chicago stated May 30  that appellate courts cannot rule on whether the federal prosecution against him is not in accordance with constitutional separation of powers at this point, prior to his trial.

Schock, 36, was indicted by a federal grand jury in November 2016 on 24 counts of fraud, including wire and mail fraud, false tax returns, theft of government funds and more. All are felonies.

Schock resigned his 18th Congressional House seat in March 2015 in the wake of the government inquiry into these allegations. At the time, he was the youngest member of Congress.

He was subsequently replaced by Republican Darrin LaHood who won a special election in September 2015.

“These charges allege that Mr. Schock deliberately and repeatedly violated federal law, to his personal and financial advantage,” said

U.S. Attorney Jim Lewis, Central District of Illinois said at the time the congressman “deliberately and repeatedly violated federal law, to his personal and financial advantage” in misusing public fund and campaign funds.

The 52-page indictment cites such indulgences as office renovations to the theme of the PBS series, “Downtown Abbey”, Super Bowl Tickets bought, then sold for profit, private jets, and extravagant gifts. 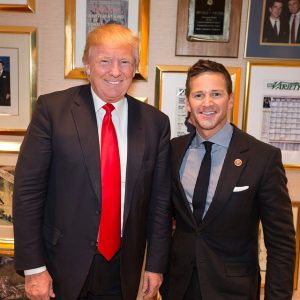 Former US Rep. Aaron Schock in Nov. 21, 2014 photo with now President Donald J. Trump was posted on Schock’s Facebook page with the comment: “Catching up with The Donald at his office in NY. Good advice on tax reform, real estate investment and a little bravado “You have to think anyway, so why not think big?”

Schock’s legal team argued to the 7th U.S. Circuit Court of Appeals that U.S. House rules on the matters on which he is charged are ambiguous, citing where courts have said the Constitution prohibits federal prosecutors from charging sitting legislators based on those congressional rules that are open for interpretation.

The three judges disagreed with that argument.

“Microsoft Corporation has the sole power to establish rules about how much its employees will be reimbursed for travel expenses, but no one thinks that this prevents a criminal prosecution of persons who submit fraudulent claims for reimbursement or fail to pay tax on the difference between their actual expenses and the amount they receive from Microsoft,”  the court stated in its 10-page ruling.

Schock has pleaded not guilty to all counts, which include wire fraud and falsification of election commission filings. A conviction on just one count of wire fraud carries as a maximum 20-year prison term.