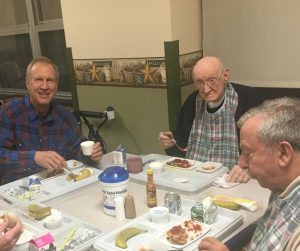 Gov. Bruce Rauner shares a meal with residents of the Quincy Veterans Home. Rauner has been at the home since last week trying to get a better handle on conditions at the facility. Thirteen residents of the home have died of Legionnaires’ disease since 2015. U.S. Sen. Dick Durbin said replacing or repairing the plumbing in buildings where the disease has been or is likely to occur should be done so “there can be no question that we did everything we could for these veterans.” (Photo from Gov. Rauner’s Facebook post)

SPRINGFIELD — Illinois’ auditor general detailed delays, mishandling and poor communication from former Gov. Bruce Rauner’s administration in its response to a deadly Legionnaires’ disease outbreak at the Illinois Veterans Home at Quincy which began in 2015.

The report from Auditor General Frank Mautino said at least 220 residents and staff became ill in August and September 2015, with 57 testing positive for legionella and 101 testing negative. In total, 66 residents and eight employees or volunteers have tested positive for legionella since 2015, and 13 related resident deaths occurred, the report said.

The report traced a “likely cause” of the contamination to a water tank that was out of circulation from July to August 2015. While it was offline, it was unheated until it was cycled back into service on Aug. 6, 2015, two weeks before the initial outbreak was identified.

Shortly after that, the Illinois Department of Public Health began recommending water restrictions and remediation efforts, and by December 2015, the Centers for Disease Control and Prevention had recommended filters be installed on all fixtures in the hot water system.

Those filters were not installed until April 2018, the report said, shortly after another Legionnaires’ disease outbreak was identified — the fourth since the initial 2015 outbreak. Other outbreaks took place from March to April 2016, July to December 2016, and another from May to November 2017 which resulted in one death.

The report said no cases of legionella have been diagnosed since those in February 2018.

Mautino’s report said one in four people who contract Legionnaires’ disease at a health care facility will die, and IDPH leadership failed to see the severity of the 2015 outbreak.

In particular, there was “limited notification or specific procedures” provided by the IDPH to the nursing staff at Quincy until six days after the initial determination of an outbreak.

The audit also said that although officials claimed residents were monitored more thoroughly starting Aug. 22, there was no documentation to support that IDPH made such a directive to nurses or staff.

“Additionally, auditors reviewed the medical records for the 45 residents who had disease onset after August 21, and found that none received increased monitoring prior to the onset of symptoms,” the report said.

The report also found that the state had spent more than $9.6 million for legionella remediation at the Quincy home as of June 30, 2018.

The audit was called for in Senate Resolution 1186 in the previous General Assembly, a bipartisan resolution whose lead sponsor was state Sen. Tom Cullerton, a Villa Park Democrat.

In a statement Monday, Cullerton, a U.S. Army veteran and a vocal critic of Rauner’s handling of the outbreaks, said the report reinforced “what we already knew.”

“The previous administration spent their time and energy covering up their lies and failures, instead of working with the General Assembly to implement solutions that would have protected the health and well-being of our veterans, their loved ones and staff at the Illinois Veterans Home at Quincy,” he said. “It is inexcusable and sickening that they were more worried about concealing their lies to the General Assembly than saving the lives of our nation’s heroes.”