In “The Dark Knight,” Christian Bale stars as Bruce Wayne, who has a penthouse overlooking the twin buildings of Chicago’s Marina City. (Warner Bros. Pictures)

Maybe Illinois has produced so many cool movies because it offers such a vastly diverse spectrum of locations to tell highly visual stories.

Or maybe our state has pumped out impressive pictures because the Illinois Film Office and Chicago Film Office cut through red tape for appreciative filmmakers.

Or, maybe Illinois seals those deals with its attractive 30-percent tax credit on film production costs. (Being the only state in the union with a diversity provision as part of its tax credits can’t hurt.)

Many local scenes turn up in iconic Illinois-filmed motion pictures such as “The Blues Brothers,” “Ferris Bueller’s Day Off,” “Home Alone,” “The Breakfast Club” and “The Fugitive.” Here are eight others filmed at locations across the state that are worth a special mention, too. 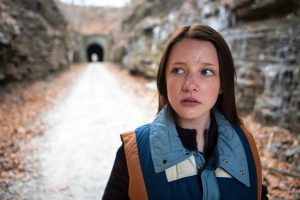 Tunnel Hill in Johnson County is the setting as a teenage girl (Samantha Isler) runs into gypsy moonshiners who say they can resurrect her dead brother in Hunter Adams’ thriller “Dig Two Graves.”

1. “Dig Two Graves” — Hunter Adams’ horror tale hails from the comic book tradition of “Tales from the Crypt,” but it stands on its own as a crisply edited, surprising display of craftsmanship on a budget. Adams fell in love with the rich, diverse and truly creepy locations in several counties at the state’s southern tip, where he whisks us into a rural nightmare of Kubrickian symmetry. The railroad tunnel at Tunnel Hill in Johnson County figures in, as do Marion’s town square, downtown Vienna and Ferne Clyffe State Park near Goreville.

3. “Groundhog Day” — The town of Punxsutawney got so miffed that Harold Ramis chose suburban Woodstock to play the Pennsylvania town in Danny Rubin’s supernatural comedy that it refused to allow the real Punxsutawney Phil to appear in the movie. Too bad that Punxsutawney’s Town Center didn’t look good on camera, according to Ramis. Woodstock turned its movie fame into an annual “Groundhog Day” festival.

In the front lobby of the old Sherman Hospital in Elgin, signs direct everyone to the set for the movie “Contagion.” (Laura Stoecker)

4. “Contagion” — Steven Soderbergh’s 2011 virus-pandemic thriller shot scenes all over the suburbs, most notably at the old Sherman Hospital in Elgin and the Central Elementary School in Wilmette. A key grocery scene (with Matt Damon) was filmed in downtown Western Springs. Even Waukegan got into the act, with its Amstutz Expressway acting the role of Chicago’s Dan Ryan Expressway.

5. “The Fury” ­­— Much of Brian De Palma’s stylistically sleazy 1978 horror movie was shot in Chicago. It used the same room from Chicago’s now-extinct Plymouth Hotel that would later be used in 1980’s “The Blues Brothers.” But the film’s best claim to fame would be the deadly carnival ride filmed in the once-immensely popular Old Chicago indoor amusement park in Bolingbrook.

6. “The Untouchables” — Brian De Palma returned to the Windy City to shoot a 1987 version of the popular TV series starring Robert Stack and created one of the two best films to showcase the city of Chicago as an essential presence on the silver screen. 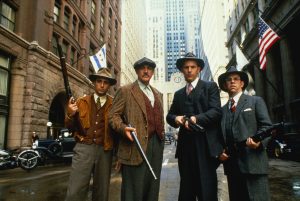 The 1987 film “The Untouchables” showcased Chicago landmarks such as The Rookery building, left. (Paramount Pictures)

The highlight? The slow-motion gunfight on the steps at Union Station, a breathlessly constructed homage to the famous Odessa Steps Sequence from Sergei Eisenstein’s seminal 1926 silent Russian masterpiece “Battleship Potemkin.”

7. “The Dark Knight” ­— The second film to showcase the city of Chicago as an essential presence on the silver screen. Exceptnow, the dark and gritty Windy City plays the role of the even darker and grittier Gotham City in Christopher Nolan’s 2008 Batman movie. The highlight? A carefully planned explosive flip of an 18-wheeler upside down in the middle of LaSalle Street. No digital effects needed.

–BICENTENNIAL 2018: 8 films you didn’t know were filmed in Illinois–