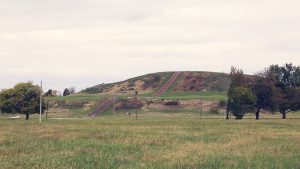 Monk’s Mound is the largest mound at the Cahokia Native American site and is the largest man-made earthen mound in the North American continent. The mound stands about a 100 feet tall and has a base measure of 955 feet at its widest. (Photo/Julian Lim)

A gaggle of rambunctious fifth-graders scrambled to the top of the 100-foot-high Monks Mound to get a great view of the Gateway Arch in downtown St. Louis and burn off energy at the end of their class field trip to the Cahokia Mounds State Historic Site.

Before climbing Monks Mound, the Gardner Elementary students from Waterloo, Illinois, toured the historic site’s spacious interpretive center in Collinsville, Illinois, and learned how Native Americans based at the mounds conducted trade with people in other regions, including the Great Lakes for copper and the Gulf of Mexico for seashells.

“People from around the world come here to see the Cahokia Mounds, and it’s right in our backyard,” said Amy Wagenknecht, one of the students’ teachers.

The students were among the estimated 300,000 people who visit the state historic site each year.

Monks Mound was built by Native Americans, who are now known as members of the Mississippian culture. It is the largest pre-Columbian, earthen structure in all of North and South America, said Bill Iseminger, the assistant site manager who has worked at the Cahokia Mounds site since 1971.

It also is one of the 80 earthen mounds remaining in the area, with 70 of the mounds protected within the Cahokia Mounds State Historic Site, which encompasses 2,200 acres. There originally were 120 mounds at the site.

At the height of the Cahokia Mounds, an estimated 10,000 to 20,000 American Indians lived at the site, and perhaps twice as many lived in the region, Iseminger said.

Cahokia was the largest prehistoric American Indian settlement north of Mexico. It’s known as “America’s first city,” and it is believed to have had a population larger than London in 1250.

Archaeologists are not sure why the Mississippians formed this major settlement around 1000 to 1050, and they don’t know why the site was abandoned by 1400, Iseminger said. 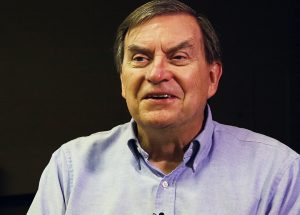 For the last 47 years, Bill Iseminger has served as the assistant manager for the Cahokia Mounds State Historic Site. It was his first job after graduating with his master’s in anthropology from Southern University of Illinois Carbondale in 1971. (Photo/Julian Lim)

“The urban nature of Cahokia is what intrigues a lot of archaeologists and historians; trying to understand how it began and how it ended and that middle period is all something we’re all constantly trying to unravel,” Iseminger said. “We don’t know what they called themselves or this place. It’s not really a tribe, it’s an urban area.”

Archaeologists have raised questions about why the city rose from the Mississippi River flood plain near present-day St. Louis: Was it a powerful leader? Was a new religion developing? Was it inspired by a supernova seen worldwide in 1054?

Iseminger said a combination of motivations likely caused the Cahokia site to be abandoned.

“They probably depleted most of the natural resources in the area,” Iseminger said.

Other possible causes include: a few bad leaders running the city; reduced crop production caused by extended droughts and cooling temperatures; flooding; nutritional problems from an overdependence on a diet of corn; a contagious disease could have spread with so many people living in close proximity; and a gradual breakdown of the ruling system with some challenging the authorities.

“Where they went or what tribes they became is not clear,” Iseminger said.

In the 1800s, the mounds were named after the Cahokia tribe that lived in the area when European settlers arrived. But that tribe had moved into this area long after the mounds site had been abandoned.

Iseminger said French settlers often named their villages after American Indians who lived nearby, and that’s the case for Cahokia, Illinois, which is about 11 miles from the Cahokia Mounds site, which is in Collinsville.

Monks Mound is named after a group of French Trappist monks who lived near the mound on another mound from 1809 to 1813. 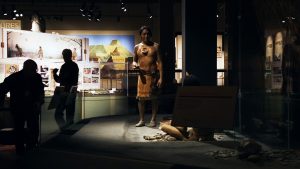 Visitors of the Cahokia Mounds Interpretive Center observe a display which depicts archaeologists believe how Native Americans lived at the site. Entrance into the Interpretive Center free of admission, and is open to visitors 9 am to 5 pm daily. The Cahokia grounds are open from dawn till dusk. (Photo/Julian Lim)

Many visitors think the mounds are burial sites, but Iseminger said most of the mounds were actually platforms for buildings. A large building on top of Monks Mound likely was the home of the site’s leader.

But archaeologists have found burials in Mound 72, where the remains of more than 280 people have been found.

The majority of bodies in the mass graves were of young women 15 to 25 years old, “who apparently had been sacrificed and buried in these mass graves,” Iseminger said.

“One burial seemed to be an individual of great importance; he was buried with the remains of other individuals on what appeared to be a platform of shell beads,” according to the Cahokia Mounds website.

Archaeologists have found evidence of sun-based calendars comprised of red cedar posts in large circles on the Cahokia site. The circles were dubbed “Woodhenge” in a nod to Stonehenge in England.

In 1985, posts were erected at the Cahokia site to replicate one of the original circles.

Visitors can also see a reconstruction of what the wooden wall blockading Cahokia might have looked like.

The Cahokia site was protected by the state in 1920s and in 1982 was named a World Heritage Site by the United Nations Educational, Scientific and Cultural Organization.

Timothy Pauketat, an archaeologist and professor of anthropology for the University of Illinois at Urbana-Champaign, urges the U.S. government to give federal protection to the Cahokia Mounds.

Pauketat, who published a book about the mounds titled “Cahokia: Ancient America’s Great City on the Mississippi” in 2009, said many Illinoisans do not recognize “what a tremendous historical phenomenon existed in the southwestern part of the state.”

“What happened there is comparable to the birth of civilization in Mesopotamia or Mesoamerica, except that Native Americans did it here and in ways culturally and contextually unique,” he said in an email.

“The scope of the preservation problem is so great, which is why we need national involvement,” Pauketat said. “The state of Illinois can’t do it all.”

Hours: 9 a.m. to 5 p.m. Wednesday through Sunday during winter months. The site is usually open seven days a week during the summer months.

Groups: Download a group reservation form from the mounds’ website and email it to the ILLINOISouth Tourism office via cahokiamounds@thetourismbureau.org.

Location: The site’s address is 30 Ramey St. in Collinsville, Illinois. Take Exit 24 off Interstate 255 and head west from the interstate on Collinsville Road for just over a mile. The entrance to the interpretative center will be on your left.

Mike Koziatek of the Belleville News-Democrat can be reached at mkoziatek@bnd.com or on Twitter at @MikeKoziatekBND.