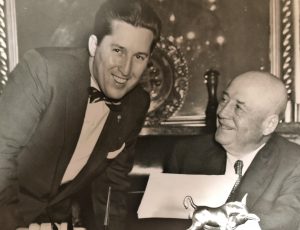 Kenneth J. Gray was a favorite of Rep. Sam Rayburn of Texas, who is credited as being the principal leader in guiding passage of the New Deal legislation in the House of Representatives during the 1930s. (Photo courtesy of Marleis Trover/Maxine Pyle)

In 1956, a little-known freshman congressman from Franklin County in southern Illinois gave his first major speech on the floor of the U.S. House of Representatives, receiving a standing ovation for his efforts.

Carrying a bouquet of red roses, Gray illustrated the interference of lobbyists and special interests that he said were “killing” the program by snapping flowers off the stems until all the blossoms were gone.
At the conclusion of the speech, Gray suggested the lobbyists would fail and all would be “rosy” again, holding up the bouquet with white roses blooming from the bare stems.

In a political career that spanned 24 years in Congress, Gray was responsible for bringing nearly $7 billion in public works projects to southern Illinois.

Using earmarks on bills often referred to as “pork barrel politics,” Gray’s ability to score for his district earned him the moniker “the Prince of Pork.”

“It was a title he embraced,” said his daughter, Becky Gray-Clay. “My dad knew that those projects meant jobs for people in southern Illinois.”

In what would become an infamous interview with The Southern Illinoisan in 2008, Gray said, “They call Rend Lake pork. Yet the engineers, six years ago when there was tremendous flooding, said that because of Rend Lake, more than $100 million worth of property downstream was saved. If that is pork, pass me the plate, another heaping serving.”

Part of that quote ended up as the title of a book about Gray’s life by a pair of local authors and educators, Marleis Trover and Maxine Pyle. 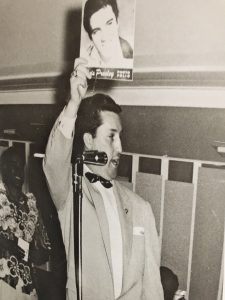 Kenneth J. Gray traveled to Hawaii on the ocean liner Mastonia with Elvis Presley. Always interested in helping a charity, Gray secured a signed photo of “The King” which he promptly auctioned, netting $725 from another member of Congress. (Photo courtesy of Marleis Trover/Maxine Pyle)

“Pass the Plate: the Legend and Legacy of United States Congressman Kenneth J. Gray” tells Gray’s story via a walk down memory lane that showcases the man that Trover describes as “one of the most effective congressmen of the 20th century.”

Trover said Gray understood the most important job of a leader is to provide hope.

“Each time he showed off southern Illinois,” Trover said, “he brought more people here or he connected our area with officials in other cities.”

Although he never went to college, Gray educated himself about his area and beyond. He exaggerated his age to 18 to enlist during World War II, Trover said.

Gray’s exaggeration, including his colorful suits, bow ties, red permed hair, and even his modes of transportation, made him stand out, giving him instant recognition.

After returning from World War II, Gray served as commander of the American Legion for the 15-county area, providing services to help reintegrate the returning soldiers.

“Having flown in the war, Kenny used his skills to pilot a helicopter around southern Illinois,” Trover said. “He later used what he saw in those counties to identify priorities to raise the standard of living for all the people of southern Illinois.”

Gray’s influence can be seen all over southern Illinois, starting with Interstate 57, part of which is now named Ken Gray Expressway in his honor. Many small towns have post offices thanks to Gray. Rend Lake is another of the “pork” projects Gray brought to southern Illinois. Rend Lake spurred economic growth when a boat factory opened nearby that offered steady employment to an area with little opportunity.

Gray sponsored infrastructure bills that helped jumpstart the growth of industry throughout his district, including in Marion, where Pepsi MidAmerica, one of the area’s largest employers, is located.

Former Mayor Bob Butler, the longest serving mayor in Illinois history, worked closely with Gray to secure federal funding that enabled Marion to grow. Butler told Trover he was “irritated” when Gray was referred to as “the Prince of Pork.”

“He was just better at it than anyone else and they couldn’t stand it,” Butler said.
Gray’s wheeling and dealing with Washington’s elite also brought the Marion Federal Penitentiary, Devil’s Kitchen Dam, Olmsted Lock and Dam, numerous federal housing projects, an expansion project for the Marion Veterans Administration Medical Center, education funding and funding for the arts. 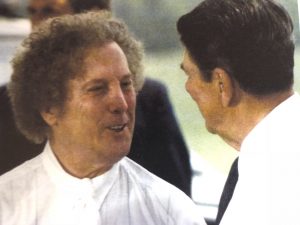 Kenneth J. Gray flew to southern Illinois on Air Force I with President Ronald Reagan in 1988.  They visited the Krone farm in Du Quoin to view damage caused by the drought. (Photo courtesy of Marleis Trover/Maxine Pyle)

For Gray, it was never about power or personal gain; it was always about the people. “When you came into his office, it didn’t matter if you were Democrat or Republican,” Gray-Clay said. “You were his constituent and he would help you.”

Gray was popular at home and gained respect in Washington’s inner circles. He was frequently called upon by House leaders such as Sam Rayburn and Tip O’Neill to stand in as the speaker pro-tem. He frequently appeared in public with presidents John F. Kennedy, Gerald Ford, Lyndon Johnson and Ronald Reagan.

Gray retired in 1989. He continued to be active in the district, lending a hand as an auctioneer, appearing at various dinners and fundraisers, or offering advice to his successors.
Gray died on July 12, 2014, at age 89. He enjoyed reciting parables and poems, with one of his favorites being Allen Dromgoole’s “The Bridge Builder.”

An old man going a lone highway,
Came at the evening, cold and gray,
To a chasm, vast, and deep and wide,
Through which was flowing a sullen tide.
The old man crossed in the twilight dim;
The sullen stream had no fear for him;
But he turned, when safe on the other side,
And built a bridge to span the tide.
“Old man,” said a fellow pilgrim, near,
“You are wasting strength with building here;
Your journey will end with the ending day;
You never again will pass this way;
You’ve crossed the chasm, deep and wide-
Why build you this bridge at the evening tide?”
The builder lifted his old gray head:
“Good friend, in the path I have come,” he said,
“There followeth after me today,
A youth, whose feet must pass this way.
This chasm, that has been naught to me,
To that fair-haired youth may a pitfall be.
He, too, must cross in the twilight dim;
Good friend, I am building this bridge for him.”

Gray left a legacy that has become a bridge for the southern part of Illinois, one that preserves the beauty of the land but still connects the rural areas to other parts of the country.

Holly Kee, a reporter for the Southern Illinois Local Media Group, can be reached via email at hkee@localsouthernnews.com.

–BICENTENNIAL 2018: Gray’s legacy leaves a bridge to the future for southern Illinois–