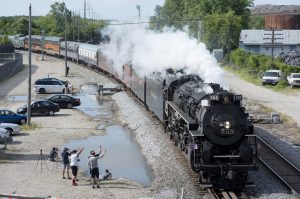 Railroads made Chicago, stealing commerce from steamboat hubs like St. Louis. But it’s a love-hate relationship in the suburbs and Chicago today.

Freight, passenger and commuter trains pass through the Chicago area at the rate of 1,300 a day, Illinois Department of Transportation says, and rail lines fan out in every direction.

“People in Illinois are as intimately tied to railroading as anywhere in the country,” DePaul University transportation professor Joseph Schwieterman said. “Millions live close to busy rail lines, use commuter or intercity passenger trains, or cross busy sets of tracks every day, giving them a strong psychological connection to railroads.”

But being the rail hub of the nation also has its downside: Meager funding for commuter rail, crossing delays, and freight gridlock are among the challenges facing the state in the 21st century.

The first train to appear in the Chicago metro region was a Galena & Chicago Union Railroad steam engine dubbed the “Pioneer” in 1848, according to the Encyclopedia of Chicago. 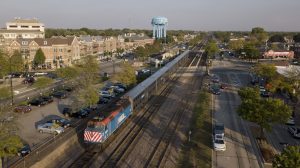 One of its first destinations was the settlement of Elmhurst, foreshadowing a regional commuter rail service under Metra that made 78.6 million passenger trips in 2017.

“Our legacy suburbs developed along the railroads. In many respects they owe the initial growth to the railroads,” railroad historian and Metra Chairman Norm Carlson said.

Prior to railroads, “shipping was the only way to move bulk commodities,” Carlson explained. “‘Interior’ delivery was limited to what the horse or mule could carry or pull.”

Initially, Midwestern railroads were built to link the nation’s interior with waterways, like the Mississippi River, and St. Louis was pegged as the gateway to the West. Chicago gained traction “in large measure to the access to Lake Michigan,” Carlson said.

“From moving crops to market to moving raw materials in and finished products out, the railroads connect the economic activity of the state,” Carlson said.

Schwieterman noted “everyone knows that railroads are a huge part of Chicago’s history, but many don’t fully appreciate that other places, including Decatur, Galesburg, Effingham and Rock Island, were rail junctions of enormous importance, as well.” 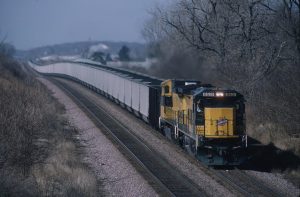 As of 2018, the Chicago region absorbs almost 500 freight trains daily or 25 percent of traffic in the United States.

But outdated infrastructure where railway tracks intersect or cross busy roads mean trains can spend as much time in Chicago as it takes to reach either coast. Efforts to untangle the rail spaghetti — expediting trains and improving safety — will cost $4.4 billion and are about 40 percent complete.

Both Metra and Amtrak are suffering from lackluster funding amid demands for better service from riders. Yet, despite the budget drought for commuter rail, Illinois’ high-speed rail project to begin service between Chicago and Springfield with speeds of 110 mph is expected to finish this year.

“Chicago remains the workhorse of our country’s railroad industry,” Schwieterman said. “That keeps rail lines in our state unusually vibrant and busy.”

Marni Pike is the transportation writer for the Daily Herald in Arlington Heights. Her email is mpyke@dailyherald.com.