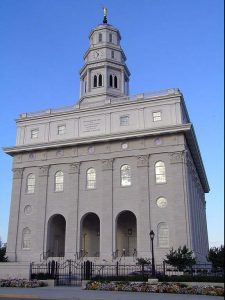 This temple, which replaced the original completed in 1848, sits atop a bluff in Nauvoo, overlooking the Mississippi River. The new temple was build in 1999 and dedicated in 2002. (Journal-Pilot file photo)

For the Mormons, Quincy appeared to be a beacon of hope and safety during tumultuous times.

But in the Quincy area they were welcomed. They established their own town, Nauvoo, about 50 miles north of Quincy. Gregg’s book describes early Nauvoo, before the building of the Mormon Temple, as a picturesque site on the east side of the Mississippi River, about 10 miles north of Keokuk, Iowa.

“The origin, rapid development and prosperity of this religious sect are the most remarkable and instructive historical events of the present century,” Gregg wrote about the Mormons in Nauvoo.

Illinois was a new home where members settled after being driven out of New York, Ohio and Missouri. Unfortunately, the Mormon followers would eventually be driven out of Illinois, too.

The founding of a faith

The founder of the religion, Vermont native Joseph Smith, was living in New York in 1820 when, at age 14, he read a passage in the New Testament and went to the woods to pray. It is there where Smith said God and Jesus Christ appeared to him, according to The Church of Jesus Christ of Latter-day Saints website. This vision is known now to Mormons as the “First Vision.”

“I saw a pillar of light exactly over my head,” Smith wrote, “above the brightness of the sun, which descended gradually until it fell upon me.”

That experience inspired him to found Mormonism. Church members believe Smith was led in 1823 to a hill in Palmyra, New York, where he received, from an angel known as Moroni, an ancient record, engraved on gold plates, that gave the history of the people who lived on the American continent during the time of Christ, according to the Mormon website. He used those to write the “Book of Mormon: Another Testament of Jesus Christ.”

Smith – along with Oliver Cowdery, Martin Harris and David Whitmer – then began spreading the word of the book and created a new religion. Cowdery, Harris and Whitmer were known as the “Three Witnesses” and were the only other people to see the plates.

Smith and a few followers made their way to Ohio, where the religion increased in numbers but persecution continued, so they traveled to Missouri. Church members began to flee from Liberty, Mo., after Smith and other Mormon leaders were arrested in November 1838 on charges of murder, treason, burglary, arson, larceny and theft, according to “Utopian Communities of Illinois” by Randall Soland.

“Eventually, a total of 8,000 Mormons came to Quincy, where the citizens offered their sympathy and assistance by opening up their homes … giving the Mormons food, clothing and shelter,” Soland wrote.

Smith joined his family in Quincy, but soon began searching for a new home. Mormon leaders purchased several hundred acres of land in Commerce, now known as Nauvoo, and began building before the church members joined. By June 1840, there were nearly 3,000 people in Nauvoo.

“Between 1837 and 1846, Mormon missionaries in Great Britain baptized almost 18,000 British citizens from England, Scotland and Wales, of whom 4,733 immigrated to Nauvoo,” Soland wrote.

Within eight years of settling in Nauvoo, the number of residents had grown to nearly 12,000. About $1 million was raised for construction on a temple, which started in 1841 and completed in 1846. New laws were incorporated to help the church prosper, such as tithing, which started in 1838.

“Under the law of tithing, 10 percent of the member’s possessions and property at the time of baptism, as well as 10 percent of their annual income, was to be given to the church,” Soland wrote.

The Bill of Incorporation empowered the mayor and aldermen of Nauvoo City Council to pass any law they chose, including the court of Nauvoo authority to grant writs of habeas corpus (a court order that allows a prisoner to be released from detention if a judge determines there to be a lack of sufficient cause or evidence). This law applied to Smith, regardless of jurisdiction. 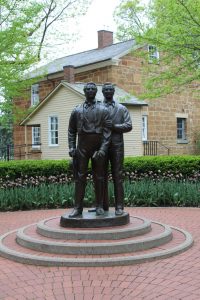 A statue of Joseph Smith and his brother Hyrum stands outside the Carthage Jail where the two were killed in 1844. The historic jail is still open for tours. (Journal-Pilot file photo)

Not everyone was happy with the new faith, though. In 1844, a group of dissidents formed an opposition group to the Mormons, and started a newspaper.

“The first and only edition of the Nauvoo Expositor was printed on June 7, 1844,” Soland wrote. “It contained scandalous and derogatory allegations about the ‘adulteress’ lives of Smith and other Mormon leaders. Smith and the city council declared the newspaper libelous and a public nuisance and ordered the town marshal to destroy the press.”

The group against the Mormons filed charges in Carthage against Smith, saying he incited a riot. But due to the city’s ability to issue writs of habeas corpus, Smith was arrested, quickly tried and acquitted by the Nauvoo court.

Anti-Mormons in Illinois, Iowa and Missouri were outraged, according to Soland’s book. Smith contacted Gov. Thomas Ford for help.

“Ford instead declared the destruction of the Expositor illegal and demanded that the Smith brothers (Joseph and Hyrum) come to Carthage for retrial,” he wrote.

Smith was arraigned in Carthage, where bail was set high but was quickly paid. Smith was arrested once more for treason, “on the grounds that Smith had wrongly declared martial law in Nauvoo during the destruction of the presses of the Expositor.”

And it was while being held in the Carthage Jail with his brother, Hyrum, that Smith was killed on June 27, 1844.

Smith and his brother were killed within minutes.

After the death of Joseph Smith, the church was run by the Twelve Apostles and Brigham Young until 1847. Young became the second prophet and president in 1847.

A couple of years after Smith’s death, word spread about possible attacks heading toward Nauvoo that would lead to the arrest of the Twelve Apostles and destruction of the temple. An exodus began Feb. 4, 1846, with small groups of travelers leave Nauvoo by walking across the frozen Mississippi River.

The headed West in hopes of finding a better life in the Rocky Mountains or on the Pacific Coast. It was not an easy journey, but they eventually settled in Salt Lake City, Utah, where the faith is based today.

Although their time in Illinois was brief, Nauvoo and the Mormons who resided there are the key to Hancock County’s tourism. Thousands of visitors from across the country come to Nauvoo to see the rich history.

Tours of the Carthage Jail, now owned by The Church of Jesus Christ of Latter-day Saints, are available today. The original door with a bullet hole remains. Visitors can see where the jailer and his family would have slept; where the Smith brothers were held; and where they were killed. Joseph and Hyrum Smith are buried in Nauvoo next to the original Joseph Smith homestead.

Another attraction is the temple. The original temple, which Smith never saw completed, was burned down by an arsonist in 1848. A tornado two years later completed the destruction. A new temple was rebuilt in 1999 and dedicated in 2002.

Emma Baker is the editor of the Journal-Pilot in Hancock County. She can be reached at editor@journalpilot.com.