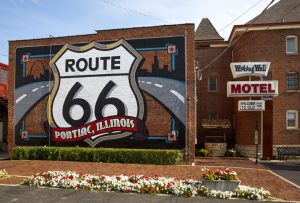 The Route 66 logo fills the wall at the rear of the Route 66 Hall of Fame & Museum in Pontiac. Rich Saal/The State Journal-Register

Perhaps it is the yearning for yesteryear that endears so many to Route 66.

Who wouldn’t want to jump into a classic car and explore the United States, stopping at shiny new service stations to pump gas into your vehicle, or sip a cold drink from the soda shops that dot the roadway? Such sepia-toned wishes of driving the Mother Road in its heyday could prompt many of us to start packing for a trip.

Ford had been mass-producing vehicles for a little more than a decade when Route 66 was commissioned on Nov. 11, 1926. It was one of the original highways within the U.S. Highway System, its 2,448 miles starting in Chicago before arriving on the West Coast in Los Angeles (and later the Santa Monica Pier).

By 1985, Route 66 had been removed from the federal highway system, as the entire road had been replaced by the Interstate Highway System.

But it’s still possible to get an idea of what the roadway looked like: Just stop in Lexington to take a trip down “Memory Lane,” a 1-mile stretch of the original 1926 alignment of Route 66 pavement. It was turned into an interpretive trail and is open year-round to pedestrians and bicycles. There, people can delight in the restored vintage billboards and signage.

Despite it not being part of the Interstate Highway System, every year thousands still travel Route 66 to explore the communities that make up America’s Main Street.

Just a small area of Route 66 in Illinois can net some fun experiences. Take Macoupin County: Stop in Girard for a handmade soda at Doc’s Soda Fountain, which opened in 1929 as part of Deck’s Drug Store.

Take in the 22-foot-high granite monument in Mount Olive of Mary Harris “Mother” Jones, known for her work as an organizer for the United Mine Workers. And, if you’re willing to go off the beaten path, you can find the 34 separate bird tracks an errant turkey left on the wet highway cement in the 1920s (find them south of Nilwood on Donaldson Road). 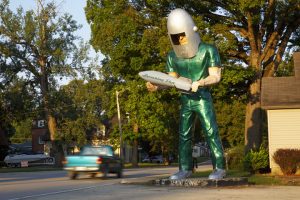 The Gemini Giant has stood over Route 66 in Wilmington since 1965. The Giant was photographed August 13, 2015. Rich Saal/The State Journal-Register

Any road trip should include visits to the many giant characters that call various Route 66 communities home. The Gemini Giant still towers over Wilmington. He holds a rocket and wears a space helmet — unlike his counterpart, the Lauterbach Man in Springfield, which holds an American flag and wears a stocking cap. Both are 28-foot “Muffler Man” creations from International Fiberglass, which were made as a promotional tool for auto shops.

Of course, the 19-foot fiberglass man holding a hot dog in Atlanta shouldn’t be missed either (too bad it’s not closer to the giant catsup bottle that served as a water tower in Collinsville). And don’t forget to stop in Lincoln to see the 12-foot-tall Abraham Lincoln on a 24-foot-tall covered wagon.

There are too many amazing sights to be seen on the Mother Road to list them all. But we offer a few suggestions for those who hop on the roadway at its starting point near Lake Michigan in Chicago and head southwest as they aim to get their kicks on the portion of Route 66 that travels through Illinois.

Ambler’s Texaco in Dwight is a shining example of the domestic-style gas stations along Route 66 during the mid-20th century.

Built in 1933, the station had wood clapboard siding, an arched roof and residential windows adorned with shutters and flower boxes. Three Texaco gas pumps out front were sheltered by a canopy.

In 2002, it was donated to the village of Dwight, which, with the help of the National Park Service, restored it and turned it into a visitor center. 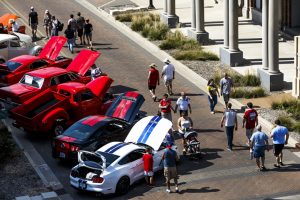 With the world’s largest painting of the Route 66 shield on the outside and thousands of artifacts inside, the Route 66 Association Hall of Fame & Museum in Pontiac is a shrine to the starting stretch of the Mother Road.

The current incarnation opened in a former firehouse in 2004 and honors people and places that made significant contributions to the history and character of the road.

Travelers have been able to find Beer Nuts since 1937.

That’s the year Arlo Shirk and his father, Edward Shirk, bought a small confectionery store in downtown Bloomington, along with the recipe for a special glazed peanut. In 1950, the Shirks packaged the first bag for a local liquor store, calling them “Shirk’s Glazed Peanuts.” Three years later, the name was changed to Beer Nuts.

Production of Funks Grove Pure Maple Sirup has been a family operation since the mid-1800s on land just off Route 66 between Shirley and Bloomington.

In early spring each year, the maple trees are tapped and the sap is processed into the sweet product that has made this business a favorite stop among Route 66 travelers. Tours of the facility are available.

More than 80 painters joined forces in 2003 to help preserve the art of hand-painted advertising murals in Atlanta as part of the LetterRip on Route 66 event.

Five murals were painted, all depicting various scenes from life in downtown Atlanta worked into historical advertisements. The year before, members of the LetterHeads organization painted the J.M. Judy & Sons grocery store advertisement that stretches the full length of one downtown building.

More than 1,000 classic cars and tens of thousands of spectators annually attend the three-day International Route 66 Mother Road Festival in downtown Springfield. This year’s is scheduled for Sept. 21-23.

There always has been food, special guests and musical entertainment. But from the Friday night cruise and restoration-parts vendors to the classic restored cars, trucks and motorcycles lining the curbs, it has been the motors that matter.

The Sky View Drive-In Theatre in Litchfield is the last operating drive-in on Historic Route 66 in Illinois.

According to its website, the Sky View opened in the spring of 1950 and has been in operation each season since then. The Sky View is a seasonal operation and is usually open Fridays, Saturdays and Sundays from early April until mid-October.

Henry’s Rabbit Ranch got its start in Staunton when founder Rich Henry’s daughter, Emily, had a pair of rabbits that quickly multiplied.

Since Emily lived in a single-room apartment, her father decided to help her out by establishing the Rabbit Ranch for the rabbits and their offspring. Today, the Rabbit Ranch is home to hundreds of rabbits that visitors can interact with (and VW rabbits, too). The ranch also contains Route 66 memorabilia.

This article was compiled from a 2015 series “66 Things about Route 66” that was produced by The State Journal-Register in Springfield.

–BICENTENNIAL 2018: Route 66 – The Mother Road offers amazing sights as it winds through Illinois–