Staley, owner of the Staley Manufacturing Co., would eventually make Decatur the “Soybean Capital of the World.” He was behind the creation of Lake Decatur, the Staley viaduct and the Staley Building (now the Tate and Lyle Building).

But Staley’s legacy will forever be linked with the NFL’s Chicago Bears, originally the Decatur Staleys — a football team that grew from Staley’s desire to dominate an industrial football league and expand his brand.

With no professional football league at that time and many former college football players working factory jobs, industrial leagues rose in popularity in the early 1900s — particularly in the college-football-crazy Midwest.

Staley, wanting to offer athletics as an outlet for his employees, decided in 1919 to form a team of his own. The first team was made up of the existing pool of Staley employees, though about half the squad had played in college. The team practiced and played at Staley Field — built and also used as a baseball facility.

After losing their first game, the Staleys won their next six games in the seven-game season, five in blowouts, to win the Central Illinois Championship.

One of those wins was a 41-0 drubbing of the Arcola Independents. Later that year, Arcola requested a rematch. Staley, though, found out that Arcola had hired Dutch Sternaman, a top player at the University of Illinois, to recruit some players — ringers. He refused to play them.

“Staley felt that was unfair — his players were just guys from the company,” Staley Museum Director Laura Jahr said. “He wasn’t willing to send his players in to be humiliated.”

But Arcola wasn’t alone. Many of the other teams in the industrial league the Staleys played in also hired workers because of their sports talent.

Staley didn’t want to be outdone, and began to think bigger than just the regional league. He saw the Staleys as a way to spread the company name nationally and, in 1920, George Halas was hired as player and coach.

Halas was a 1917 Illinois graduate who had played football, baseball and basketball for the Illini before joining the Navy in 1918 and leading the Naval Academy to a Rose Bowl win against Notre Dame. He later joined the New York Yankees, but his career was cut short by injury and he went to work with a Chicago railroad.

Staley dispatched the company’s general superintendent, George Chamberlain, to hire Halas to coach and play for the team, and also recruit friends and recent college players.

“Staley and Halas came to the agreement that while the football players would have to work at the company, they would get two hours off from their duties each day to practice,” Jahr said. “Halas didn’t want to jeopardize his football reputation by fielding a team that wasn’t ready to play.” 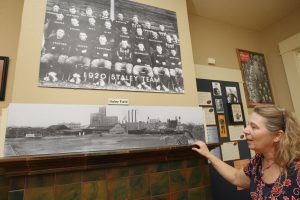 Staley hired the players at a pay rate of $50 per week — a high wage in 1920. Suddenly, Sternaman — the player Staley refused to play against the year before — was a member of Staley’s team. Some of the 1919 roster was brought back, but they were joined by Nebraska All-American Guy Chamberlain along with several former Illinois and Notre Dame players thanks to recruiting barnstorm tour by Halas.

Staley wanted a bigger stage for his players, so Halas reached out to the owner of a team, the Canton (Ohio) Bulldogs, who had just formed a league made up of several Ohio teams. Halas convinced the members of that league to expand — it was called the American Professional Football Association — and it played the 1920 season with 14 teams.

The 1920 Staleys beat the Chicago Tigers 6-0 to win the Western Championship, then played the heavily favored Akron Indians to a scoreless tie in the championship game.

It soon became apparent, though, that paying the highest caliber players, but playing at a 2,500-seat facility in a small city, wasn’t going to be profitable long term.

Staley insisted he didn’t mind if the team lost money — his vision was advertising — but when the company didn’t perform well in 1920, shareholders began looking at the football team as dead weight.

That season, still competing as the Staleys thanks to an advertising agreement between Staley and Halas, the Staleys won the APFA Championship, beating Buffalo 10-7. 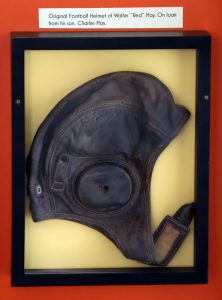 After wearing their red jerseys and tan pants the first two games of the season in Decatur, when they moved to Chicago, Halas refitted his team in blue jerseys with orange stripes — the colors of his alma mater.

By then, the grumbling shareholders had been joined by the factory workers, who didn’t appreciate the high wages and preferential treatment the football players were receiving despite doing little to nothing to help everyday production.

A cartoon was produced in the Staley Journal showing “Ma Corn,” rocking her baby, “Football,” while her other children, “Corn Oil,” “Starch,” “Syrup,” “Glucose” and “Feed,” sat around her misbehaving. Mama Corn is saying, “Children keep quiet. You have done nothing but make noise since little brother came.”

In early 1922, Staley announced the company would no longer be in the business of professional football. He estimated pro football had cost the company $100,000.

“We could not get the crowds in Decatur or other small cities to permit us to break even,” Staley told the Decatur Herald in February 1922. “Our big football games were played in Chicago, where we could get metropolitan crowds.

“Considering everything, especially the interests of the stockholders, we did not feel warranted in keeping it up.”

In 1922, Halas renamed the team the Bears, and in the same year the APFA changed its named to the National Football League. Today, the NFL is the most popular sports league in the United States.

The Chicago Bears, according to the latest calculation by Forbes Magazine in 2017, are valued at $2.85 billion — seventh-most among NFL franchises.

The Staley estate doesn’t see a dime of that.

“Everybody always asks, ‘Why would he give that up?’” Jahr said. “Well, it wasn’t the same era of football then as it is today — professional football was an unknown. It was costing him a lot of money paying the players, and that cartoon, in his mind, bothered him. Was he going to be a football team owner or a businessman? He knew a lot of people depended on him as a businessman.”

–BICENTENNIAL 2018: The Chicago Bears NFL franchise began in Decatur as the Staleys–