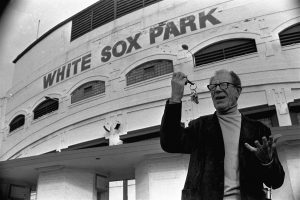 Bill Veeck, new owner of the Chicago White Sox, clowns as he stands outside the White Sox ball park holding the keys to the park, December 16, 1975. Veeck was heard to say, “It’s all mine.”(AP Photo)

He was listed in the Chicago phonebook. He often walked the Comiskey Park concourse shaking hands as he limped on his wooden leg that he retrofitted with an ashtray.

As a young man he planted the ivy on the outfield walls at Wrigley Field.

He hired Larry Doby, the first black to play in the American League just months after Jackie Robinson broke the color barrier with the Brooklyn Dodgers. And he owned the Cleveland Indians when they last won a World Series in 1948.

In later years, he was a regular on Chicago sports TV talk shows offering reasoned arguments on politics and society, and was often seen on WGN broadcasts of Cubs games shirtless with a beer in his hand sitting among the fans in the Wrigley Field bleachers.

Bill Veeck was a showman, nonconformist and a champion for the game of baseball and the fan. And he’s an Illinois product.

Veeck was born in Hinsdale in 1914. One of his early jobs was working with his father, who ran the Chicago Cubs in the 1920s and 1930s, selling everything from tickets to popcorn.

“His father, William Veeck Sr., wrote for the Chicago American under the name Bill Bailey. He was intensely critical of the Cubs. It was unheard of at the time to take a newspaper writer and make him the general manager of the team,” said Paul Dickson, author of “Bill Veeck: Baseball’s Greatest Maverick.” “He comes in and (owner William Wrigley Jr.) just loves him. 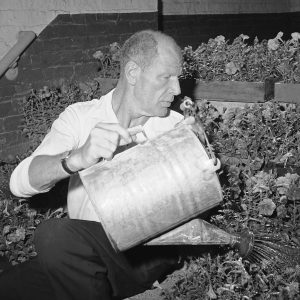 Watering petunias which raffle winner didn’t pick up after winning them, is Bill Veeck, Chicago White Sox chief executive, at Comiskey Park in Chicago, July 21, 1960. Bill, whose promotions included giving away 4,000 petunias at game the previous night, set about watering them in case the winner shows up to claim the prize. (AP Photo/Harry L. Hall)

“He went in with the idea that Wrigley wanted to promote the team as an event for the whole family, rather than a game for guys with a cigar in their mouth. He sold it as a summer oasis. They planted trees and the ivy on the outfield wall and redid the bleachers and put in new concession stands with better food. Wrigley was a great advertising man and filled the newspapers with ads, not about how great the team was, but about the experience at Wrigley Field, about how much fun the family was going to have.”

The Cubs won two National League pennants under Veeck Sr., who died in 1933 when his son was just 19 and a student at Kenyon College in Ohio. The son left school to return to work for the Cubs, becoming team treasurer.

“He wanted to fulfill what his dad was doing,” Dickson said. “Part of that was planting the ivy. He carried out the mission that Wrigley wanted. He kept Wrigley Field a friendly place. Cubs games were a social place as well as as athletic event. Veeck made sure the hot dogs were hot and the beer was cold.”

In 1942, Veeck, along with former Cubs star and manager Charlie Grimm, bought the Triple-A Milwaukee Brewers. Veeck experimented with promotions (including a contest to rename the ladies’ room. The winner was “Hall of Fem.”) and game times, seeking to attract as many fans as possible. He also enlisted in the Marines, serving three years in an artillery unit (the same unit as Peoria native and Chicago Cubs announcer Jack Brickhouse) during World War II. Veeck’s leg was crushed by a recoiling artillery piece and his foot was amputated. He would later have more than 30 surgeries on the leg and lived the rest of his life in constant pain.

Veeck sold his interest in the Milwaukee club and in 1946 purchased the Cleveland Indians.

With Doby in the Cleveland lineup, Veeck also signed legendary pitcher Satchel Paige of the Negro Leagues, making him the oldest rookie in baseball history. The Indians won the World Series in 1948. A year later, and in need of money to settle a divorce with his first wife, Veeck sold the Indians. 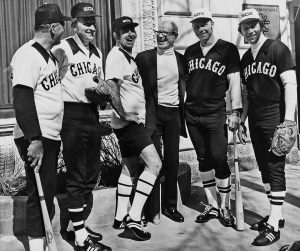 In 1951, Veeck bought the lowly St. Louis Browns. According to one tale, when a fan called the Browns’ offices to see what time that day’s game was supposed to start, Veeck responded, “What time can you make it?”

Some of Veeck’s greatest stunts took place in St. Louis. In August 1951, Eddie Gaedel, who stood 3 feet 7 inches and wore number 1/8, suited up for the Browns. The shortest man to ever play in the major leagues walked in his only plate appearance.

Veeck also turned game management over to the fans for a game, giving the crowd signs stating “Yes” and “No” when asked if the Browns should bunt, steal a base or play the infield in. The Browns beat Philadelphia 5-3 that day.

Money issues often prompted Veeck to sell his teams but rarely was he out of the game for long. After leaving St. Louis, he returned to Chicago, buying the White Sox in 1959. That year, the Sox made the World Series for the first time in 40 years, but lost to the Los Angeles Dodgers. Veeck would again sell his team.

One of Veeck’s best friends was Abe Saperstein, owner of the Harlem Globetrotters.

“They were two of a kind, promoters,” Dickson said. “At one point the two of them talked about buying a circus. It was a Chicago style — brash. If Veeck grew up somewhere else he’d be a different person. He grew up reading the Chicago writers, people from his father’s era, like Ring Lardner. It was a different kind of place than anywhere else.”

In 1976, Veeck purchased his last baseball team, the Chicago White Sox again. This was on the eve of player free agency when salaries headed north of $1 million for top stars. Veeck created a strategy to keep the Sox competitive: rent-a-player, in which he would bring in a player in the last year of his contract with no intention of signing him after the season.

“It solidified him as to who he was,” Dickson said of rent-a-player. “He relished this opportunity.”

By 1981, Veeck could no longer complete with baseball’s new financial structure and sold the team. He left the game but his legacy continues and can be seen in every major- and minor-league ballpark, from the promotions to the scoreboards. He also had an influence on race and integration of the game.

“Veeck opened the park for kids, women and families,” Dickson said. “He knew the game was constantly facing challenges and he knew he had to keep a step ahead. He realized the total package of well-contained insanity. While it didn’t always work, consider Disco Demolition (when the White Sox had to forfeit a game because fans destroyed the field), he had a major impact on the game.”

Journal Star Executive Editor Dennis Anderson can be reached at danderson@pjstar.com or on Twitter at @dennisedit.

EDITOR’S NOTE: The weekly Illinois Bicentennial series is brought to you by the Illinois Associated Press Media Editors and Illinois Press Association. More than 20 newspapers are creating stories about the state’s history, places and key moments in advance of the Bicentennial on Dec. 3, 2018. Stories published up to this date can be found at 200illinois.com.