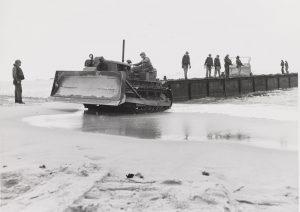 Caterpillar track-type tractor on the beach in France with U.S. troops during World War II, circa 1944. (SUPPLIED PHOTO/CATERPILLAR ARCHIVES)

“When we went into Iraq in 2001, there was no difference in my life because we went to war. But then, everyone was affected; from Victory Gardens to rationing of items to the draft, everyone was in,” she said.

Mothers saved tin cans and foil. Life went on, she said, but it was different.

“We went on with the churches and the schools, but it wasn’t the same. The Boy Scouts went on but they had paper drives,” Kerr said. “Nothing was the same as it was before Dec. 7, 1941, Pearl Harbor.”

When war was declared in December 1941, thousands of men enlisted and thousands more came through the state either en route to or arriving at training stations.

The U.S. Naval Station Great Lakes had opened prior to World War I as a recruit training center, but by the early 1930s enrollment had slowed. World War II boosted the population at the station from 6,000 to 68,000, according to the Navy. In all, about 1 million sailors trained at the facility in North Chicago until the war ended in 1945. 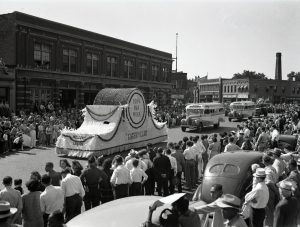 Thousands of others, including many World War I veterans, flocked to the Illinois State Militia, also known as the Reserve Militia, where they agreed to serve for two years. They stood watch over bridges, railroads and other transit centers. When the war ended, hundreds were activated to serve as shuttle drivers in Chicago as the large number of GIs returning overwhelmed buses and trains, according the Illinois Secretary of State’s office.

The number of Illinois women joining the military during the war was 13,587. Counting those who already were in the military and those whose National Guard units were activated, Illinois supplied the U.S. armed forces with nearly 1 million of its citizens during the course of the war.

Caterpillar’s role
In Peoria, production of earth-moving equipment made by Caterpillar Inc. had already picked up in pace due to the federal Lend-Lease program, supplying goods and war material to Allied countries. Caterpillar tractors were already being used by the Allies in the early stages of World War II, according to Journal Star archives. But once the United States entered the war, production escalated. Bulldozers were vital to the war effort as they allowed creation of air fields and the cleanup of debris after battle.

Central Illinois factories geared up for greater production when the United States entered the war. The Defense Department initially asked for a variety of equipment from Caterpillar, including smaller items such as transmissions for tanks and undercarriages for howitzers. Then, according to a Caterpillar historian, the Defense Department decreed for production to switch exclusively to motor graders and track-type tractors on a large scale.

Tom Emery, a freelance writer from Carlinville, said the state’s economy was booming during the war. Factories were humming with wartime activity.

“The industrial cities were cranking out products that were war related,” Emery said.

Many blacks moved to Illinois during the war, particularly to Chicago for jobs. And female employment grew by 50 percent. 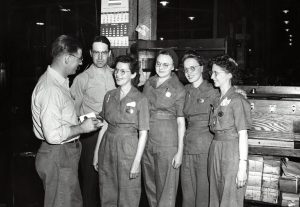 Caterpillar female employees in 1942 being recognized for a job well done in the East Peoria plant. (SUPPLIED PHOTO/CATERPILLAR ARCHIVES)

Rosie the Riveter
One of those Rosie the Riveters was Ruth Lockart, who recently participated in the oral history project at the Abraham Lincoln Presidential Library. The project was to reach out to World War II veterans and those who grew up during that time.

Lockart worked as a riveter at the Howard Aircraft Corp. in Chicago. When America went to war, she was on the family farm in Paris but she wanted to get involved in the war effort and moved to Chicago where her sister lived. She trained as a riveter at the American Aircraft Institute and later went to the Howard Aircraft Corp. where she helped to construct a Navy training plane.

“I think there were different models but I don’t know too much about them. The one I worked on was the Nightengale,” Lockart said. “We’d go to the factory at 8 a.m. and then we’d be off at 5 in the evening. We’d take a streetcar to the factory.”

Chicago, she said, was different then than now, saying it felt like a small town when she lived there.

“I have always been proud that I was a Rosie the Riveter,” Lockart said. After the war, she went to beauty school in Paris and married a soldier who fought in the European Theater.

POW camps
Illinois was the home to several prisoner of war camps including one in Washington, a few miles outside of Peoria.

From 1944 to 1945, the village was the site of a small POW camp. The camp started with 50 German prisoners who helped make K-rations for the troops. The camp expanded over the months to have more than 200 POWs, according to a book published by Mary Kerr about the Washington camp.

Kerr is working on another book about central Illinois during World War II, and including a  chapter on a POW camp in the center of Eureka.

The kids were very intrigued by the POWs, she said, noting that many would ride their bikes to the camp and talk to prisoners.

Andy Kravetz, police, courts and military affairs reporter Journal Star in Peoria. He can be reached at akravetz@pjstar.com.