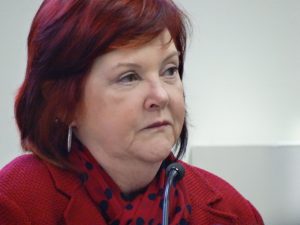 Rep. Margo McDermed (R-Mokena) speaks Thursday during a House subcommittee hearing in Springfield about legislation she proposed to prevent anyone who is the leader of a legislative chamber from serving simultaneously as a state party chairman. The subcommittee voted against advancing the bill to the full Judiciary Committee on civil law. (Capitol News Illinois photo by Peter Hancock)

SPRINGFIELD — A bill intended to rein in House Speaker Michael Madigan’s outsized role in state politics was rejected by Democrats in a House subcommittee Thursday.

The measure, sponsored by Rep. Margo McDermed (R-Mokena), would have prohibited anyone who is the leader of a legislative chamber from serving simultaneously as a state party chairman.

Madigan, the longest-serving speaker of any state House of Representatives in U.S. history, has also chaired the Illinois Democratic Party since 1998. He is also believed to be the only state-level House speaker who simultaneously serves as the state party chairman.

McDermed acknowledged the Chicago politician’s situation inspired her to offer the bill, but she denied it was aimed specifically at him.

“It’s not about one person,” she said. “It’s about the ethical conflict that every other state has ruled out.”

McDermed said every other state has either statutes, regulations or ethics codes that preclude anyone from holding both positions simultaneously.

Contacted separately, though, an official from the Council of State Governments was unable to say whether any states have legal prohibitions against serving in both roles, and he suggested that such a ban could raise constitutional issues.

In fact, the bill was referred to a constitutional law subcommittee because, in the words of Chairman Andre Thapedi (D-Chicago), it had possible “constitutional ramifications” either as a possible violation of equal protection guarantees or as “special legislation” intended to target one identifiable individual.

McDermed, however, insisted it was meant to address ethical issues about conflicts of interest, and that it would apply to any legislative leader — House Speaker or Senate President — going forward.

“I’m doing this because it seems to me an inherent conflict of interest and puts someone in a position where governing the state, legislating for the state, is not necessarily consistent with what’s best for the political party, and that’s what I’m trying to get at,” she said.

“Well, I have common sense and I can’t see that it’s a conflict,” Jones replied.

On a party-line vote of 3-2, the subcommittee voted against advancing the bill to the full Judiciary Committee on civil law.

“Apparently the claim of conflict is not accurate or persuasive to the members of the subcommittee,” Madigan’s spokesman, Steve Brown, said in an email.

The legislation is House Bill 878.